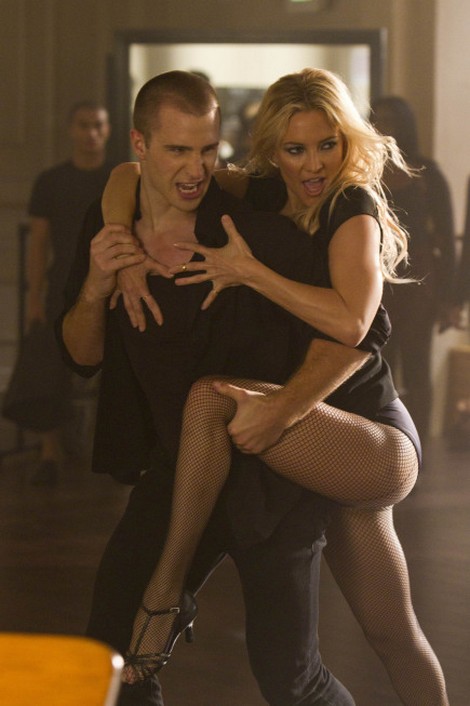 Tonight on FOX the forth season of GLEE premieres.  This season GLEE will follow characters in two states but the powers that be are promising that it won’t be complicated to follow, it will have a natural feeling.   Season 4 will switch between McKinley in Ohio and New York City.

At McKinley expect some new face in the choir room, including the half brother of Puck.  Puck did not know about the brother and he is a lot different from him.  In New York City Kurt, Santana and Rachel will take on the city.  Kurt will find a mentor in the editor of vogue who will be played by Sarah Jessica Parker.  Rachel will have problems with a mean dance instructor played by Kate Hudson.

On tonight’s episode called “The New Rachel” the members of New Directions compete amongst themselves to become the next star of the glee club.  The New Directions will take on “Call Me Maybe.”  During open auditions, a fresh crop of students is introduced, including Marley (Melissa Benoist) and Jake Puckerman (Jacob Artist), Puck’s half-brother. Meanwhile, Rachel (Lea Michele) has a rocky start at NYADA and struggles to please her demanding dance teacher, Cassandra July (guest star Kate Hudson). She also meets Brody (Dean Geyer), a handsome upperclassman.

By the time school starts Sue will have given birth.  We are not sure who the celebrity father is just yet.  But we will find out eventually.  Finn will not be back in the early episodes but he will be back eventually.

Tonight’s episode looks like it is going to be a fun episode and you won’t want to miss it, so be sure to tune in for our live coverage of  FOX’s “GLEE” at 9 PM EST! While you wait for our recap hit the comments and let us know if you are excited to see all the changes in season 4 of Glee?

Tonight’s episode starts with Rachel in her NYC dance class being absolutely dissected and ripped to shreds by new teacher, Cassandra July (I absolutely LOVE Kate Hudson in this role!). Rachel is trying hard to adjust to life in New York with a roommate she never sees and oh, by the way, she misses Finn. They haven’t spoken in two months. But she is distracted by older man, Brody, who she just so happens to meet in the coed showers. He is also a musical theater major and they bond in their bathrobes over Broadway and the fact that they’re both straight.

The New Directions are all scrambling to become “The New Rachel”, meaning the star of the Glee club, because every Glee club has its star. They try to figure out what song Rachel would sing and quickly figure out that it would be the hottest song of the summer, Call Me Maybe– so they launch into a number to that.  They realize they’ll have some stiff competition from a new crop of talented kids that want not only to join the Glee club, but dominate it.

Marley is one of those kids. Her mother is a school lunch lady and is willing to do anything to help her daughter. She sits sewing name brand tags into Marley’s second hand sweaters to make her look wealthier than she is.

Rachel makes the mistake of telling Miss July that she smells alcohol on her breath. Of course it’s just “Listerine” and the slight causes July to yell that she can dance circles around her whole class before she launch into a mashup featuring J Lo’s Dance Again. It’s totally sexy and done Bob Fosse style, leaving Rachel with her mouth hanging open.

Back to the new Rachel auditions…Jake takes the stage and has an amazing voice which wows everyone. Oh and the girls think he’s hot too.  Rachel may be sucking in dance class but she’s still killing it vocally. New York State of Mind makes her whole class smile.

After a tricky online vote Blaine is the new Rachel. Marley also secures the only new Glee club spot, a victory that thrills her mother. Marley confides that the kids are making fun of her mom and she hates having to hide that she’s her daughter. Her mom tells her that if the kids learn their connection she’ll never get a chance to sit at the popular kids table. Marley is eating lunch the very next day when the kids start ragging on her mother and she snaps, telling them that’s her mom.

Rachel is busting her ass trying to impress Miss July and it’s a failed effort. July tells her that she’s going to enjoy making her every waking moment a living hell.

The gang all goes back to Marley and apologizes for being so hurtful and this week’s episode ends with a number as her acting like the new Rachel, set to Adele’s Chasing Pavements.