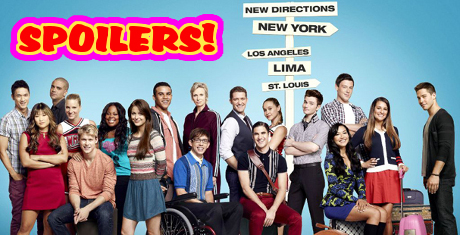 Celeb Dirty Laundry thought it wise to bring you some information on the future of Glee, seeing that the show is as integrally party of our lives as Kristen Stewart’s monogamy. The show will be facing some of the biggest changes in the history of the series, with many Gleeks already taking the life boats and planning to stroke furry kittens in order to fill the void of a post-Glee television universe. Read below for a few character and plot spoilers of the new season. If you don’t want your Glee to be spoiled like three year old tomatoes, don’t continue reading!

Will Schuester (Matthew Morrison) will undergo not just a haircut this season, but will also face several challenges with the new New Directions, his future with Emma, and the difficult process in rebuilding a nationally recognized glee club. We were taken aback by the new-gen Will Schuester haircut, but unfortunately that will not be the only surprise of the season. According to Matthew Morrison, “When you achieve something, you go back the next year and it’s kind of like, ‘Alright, what now?’ I think Will has lost a little fervor for the glee club.” You’re not alone Will… You’re not alone.

The shining star of Rachel Berry (Lea Michele) could be dimmed by the blue eyed Brody Weston (Dean Geyer) According to The Hollywood Reporter, something so shocking — it allegedly left Lea Michele speechless — will happen right after Brody plays the waiting game with Rachel. What could this “shocking” event be? Could it be the death of a central character? We all know Ryan Murphy loves his realism. The brand new (shirtless pictures went viral) Brody might also have a few secrets up his sleeve, especially with his romantic history and Cassie (Kate Hudson). The South African born Dean Geyer said about the “Brochel” future, “I definitely think he does have romantic interests in Rachel but at the same time, he respects her situation [with Finn]. He plays it really well because he puts it out there and the ball is in her court. If anyone is to blame breaking Finn and Rachel up, it’s Rachel because she’s the one who’s doing choosing.”

Cassandra “Cassie” July  isn’t just the latest Queen Bitch to join the Glee-verse, but is also a raging alcoholic with insane dance routines. Kate Hudson said to The Hollywood Reporter, “We get more into that, which is fun to play. But yeah, she’s pretty hardened.” We suspect Rachel’s going to have the roughest ride of her life with the broken Cassie, which will lead to many beautiful ballads of hardship and madness. “Vincent”, anyone?

The at-times animated Blaine (Darren Criss) will be ruling the school during his senior year. He said goodbye to Kurt while playing with plastic cups on the famous steps of McKinley High and we doubt the campy song choices will end there. Blaine will be running against the incumbent Brittany (Heather Morris) for the title of school president and he will be singing the Tears for Fears classic “Everbody Wants To Rule The World” during this traditional Glee election. The hilarious and extremely popular Brittany will not only be running for school president again, but she will also outsmart everyone during a particularly “clever” episode. We don’t know what this “outsmarting” might entail, but we really hope Ryan Murphy doesn’t make her a teenage genius. He already ruined the format once, and removing the dim-witted Brittany quips will lead to the ultimate downfall of this already wavering show.

Quinn (Dianna Agron), Mike (Harry Shum Jr.) and Puck (Mark Salling) will return to the Glee-verse to stir up some drama and throw a spanner in the characters’ lives, while Sam (Chord Overstreet), Tina (Jenna Ushkowitz) and Jake (Jacob Artist) will be severely and adversely affected by the return of familiar characters — Quinn might be pregnant again and there are rumours of love triangles.

Artie (Kevin McHale) and Sugar (Vanessa Lengies) might spark up an old flame again, while the new Rachel, Marley (Melissa Benoist), might spark up a new romance with Jake. The Quinn/Santana hybrid called Kitty (Becca Tobin) will “cycle” her way through men and Ryder (Blake Jenner, winner of Glee Project Season 2) will become the hottest thing since measles fever as he enters the Glee-verse with a love interest attached, pretty much a “buy one, get one free” deal.

We’re still not sold on the fourth season universe of Glee, but with the inclusion of interesting new characters and the crazy Cassie, we might just watch the fourth season with our eyes wide open. We’re particularly excited about the return of our favourite characters, but we’re not too sure whether they will become scenery chewers or valuable centralized characters. Only time will tell if this show will work out in the end. Let us know in the comments below how you feel about Glee Season 4 and the Glee Season 4 spoilers!