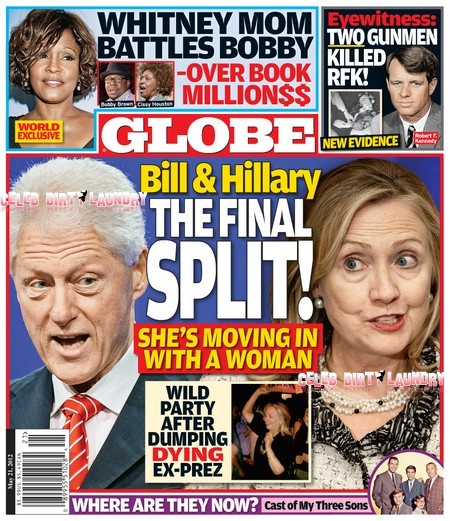 Former president Bill Clinton and his wife Secretary of State Hillary Rodham Clinton are finally headed for a split.  Over the past several years there have been rumors that the Clinton marriage was in name only and in fact they were essentially leading separate lives.

The cover of this week’s GLOBE states that ‘Bill and Hillary – The Final Split.’  Globe has the shocking details of how Hillary is moving in with a women. (Can’t wait to find out what that is all about)  Hilary, 64, who was recently in South America for the Sixth Summit of the Americas, made the most of the country’s nightlife at Café Havana.  She was at the salsa hotspot, and Hilary was seen dancing with her hands in the air and swigging back a bottle of beer while surrounded by friends.  According to Globe the partying was Hilary celebrating that she finally kicked Bill to the curb.

Many believe Hillary only stayed in her marriage to Bill after the Monica Lewinsky scandal as a way of keeping or even fostering her own political influence.  What do you think is Bill and Hillary’s marriage finally done?  Hit the comments and let us know your thoughts!

Also included in this week’s issue, the magazine has a great story on the cast of ‘My Three Sons’, Fred MacMurray, Barry Livingston, Stanley Livingston and Don Grady.  We get to find out where they all are now.

The Globe also promises to let us know all the details about how Whitney Houston’s mom Cissy Houston is battling with Bobby Brown over his attempt to cash in on millions with a Whitney book.  Whitney’s family blames Bobby for her drug and alcohol addiction so it is not a surprise that Cissy would fight Bobby on any attempt he made to make money on a Whitney tell-all book.

When GLOBE investigates and reports on a story you get the total truth – nothing is left out.  We cannot wait to pick up our copy of Globe to get all the juicy details and of course we will be sharing them with you during the week!