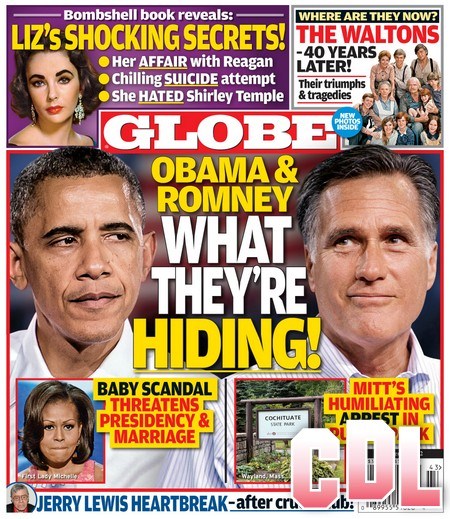 The cover of this week’s edition of GLOBE is loaded with political scandal and intrigue.  Both Presidential candidates and their advisors must be staying up nights worrying about what may be revealed in the GLOBE October 22nd Print Edition!  When GLOBE sets out to discover the news that lives beneath the superficial reporting of most sources then even the biggest players need to watch out!

Both President Obama and Mitt Romney are in for a few surprises when they read this week’s GLOBE.  We can’t give away the details but suffice to say that baby scandals, arrests, and even marriage woes are fair game.  Campaign advisors on both sides of the race must be shaking in their expensive boots as they prepare for the storm of questions that will follow the release of these startling reports.

We learn in this week’s GLOBE all about Elizabeth Taylor’s scandalous secrets that as revealed in a new bombshell book.  Liz’s hatred for Shirley Temple is exposed, and frankly, who can blame Liz for despising Shirley.  Just seeing her over-the-top performance style for 5 minutes on screen is enough to make anyone consider defiling the Temple.

But the biggest eye-opener on this week’s cover is the discovery that President Ronald Reagan and Elizabeth Taylor had an affair!  Was it when Reagan was in the White House?  Did knowledge of this tryst drive Nancy Reagan to just say no?  We will learn all the details when we read our copy of this week’s GLOBE.

Also covered this week in GLOBE is a report on the cruel snub suffered by Jerry Lewis and his subsequent heartbreak.  Jerry is a tireless worker for important charities and to think that he was cast aside is disgusting and infuriating.

The Walton’s 40 years later with all their triumphs and tragedies rounds out the cover stories for GLOBE this week.  But you can be sure that there will be loads of additional great reading inside the print edition of GLOBE just like there is every week.  As soon as I get a chance I’ll be reading my copy of GLOBE – then I’ll have something really interesting to talk about with my friends and family.  With GLOBE I know that the detailed inside scoop on the hottest stories will be mine to enjoy – and that is why I never miss reading the GLOBE.