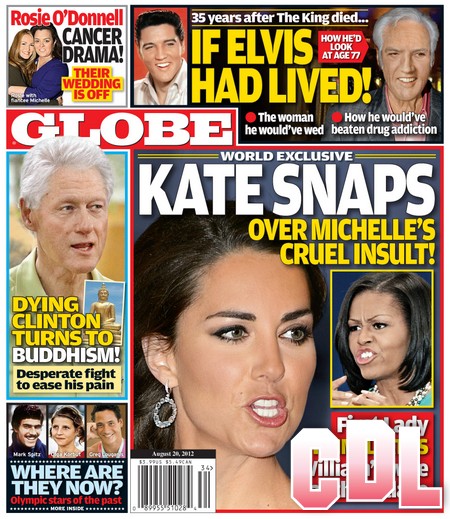 GLOBE is reporting a world exclusive on a potential international incident on the cover of the August 20th issue.  It appears that Kate Middleton has reacted strongly to a supposed insult from America’s first lady, Michelle Obama!  The caption under the picture of Kate and Michelle growling at each other mentions that the first lady ‘humiliates Prince William’s wife at the palace.’  The Duchess of Cambridge just can’t catch a break – if Kate isn’t being beaten up by Prince Charles’ crazy wife, Camilla Parker-Bowles, she’s getting slammed by Michelle Obama.

What do you suppose Michelle could have said to humiliate Duchess Kate?   We’ll need to read the print edition of GLOBE (August 20th) to learn all the details. Do you think it had to do with Kate being put in her place by the enactment of Queen Elizabeth II’s new ‘curtsy rules?’ The senior royals are royally pissed off at all the attention and popularity Kate enjoys.  To make matters even worse, the insufferable snobs were driven over the top by Kate’s privileged position next to the Queen during the Diamond Jubilee.  So Williams’ envious cousins petitioned the Queen to remind Kate of her inferior place and commoner origins.  So now, whenever Prince William is not around Kate has to bow and scrape before Will’s ugly and obnoxious cousins, the ‘blood’ princes and princesses.

GLOBE also treats us to some Elvis Presley news.  What if Elvis had lived?  What if the King had survived to deal with his drug addiction?  GLOBE analyzes how the great man would have beaten his demons and gone on to further greatness.  GLOBE also tell us, based on their inside information, whom Elvis would have married.

Rosie O’Donnell makes the GLOBE cover as well.  It seems the cancer drama plaguing her lovely fiancée Michelle Rounds, is sinking their marriage plans.  Learn all about this romantic tragedy in the GLOBE print edition, August 20th.

We also learn that a dying Bill Clinton is turning to Buddhism in a desperate fight to ease his pain.  Can the former President find both peace of mind and pain relief with the same remedy?

This week’s GLOBE will be an eye opener.  I can’t wait to learn what went on between Michelle Obama and Kate Middleton.  Why would Michelle risk any bad press during an election year?  Kate is wildly popular in the USA and picking a fight with her puts one in a strictly no-win situation.   I trust GLOBE to discover and expose the facts even when doing so risks stepping on some powerful toes.  That is why I never miss GLOBE – GLOBE gives us the uncensored truth that lets us see through all the hype.