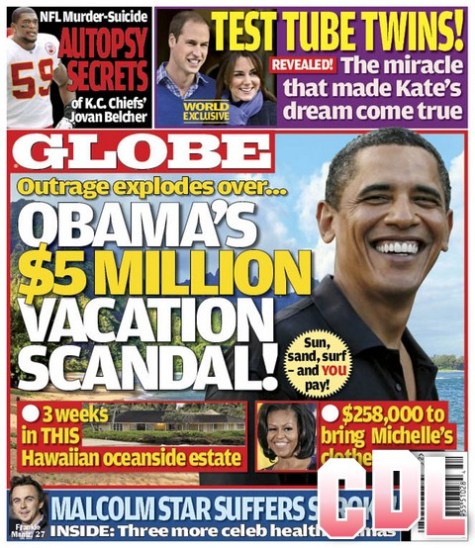 On the latest cover of GLOBE Magazine, there’s an image of a jovial Kate Middleton and Prince William with the tagline: “Test Tube Twins! The Miracle That Made Kate’s Dreams Come True!” Kate was recently forced to announce her pregnancy after she took ill with hyperemesis gravidarum – an acute form of morning sickness. Her pregnancy announcement sent royalists running for their asthma pumps and lavender tea when the news broke, but in true Kate Middleton style, she took it in her royal stride and brushed it off like a rogue hair on a tweed jacket.

Kate’s hospital visit not only resulted in the much anticipated baby announcement, but it also caused one of the nurses – Jacintha Saldanha – to commit suicide after two Australian radio DJs phoned the hospital and pretended to be the Queen of England. Saldanha patched the call through to Kate’s room, where the attending nurse explained Kate’s medical condition to the pranksters and to the world.

A pregnancy gives hope to the Royal family and to the community at large. Life, in all forms, is beautiful, and the United Kingdom – and the world – is hooked on the baby extravaganza that will soon breathe new life into the Windsors’ family tree. GLOBE There’s already rumours doing the rounds that Kate and William will name one of the babies after Prince William’s late mother, Princess Diana. This would be an elegant homage to one of the most iconic and important figures of our time. It’s expected that during Kate’s pregnancy many more rumours will surface, but if the Diana baby naming is true, we are sure the gesture would bring great joy to all those who knew the Princess of Hearts. However, the Duchess of Cambridge is very ill with her bad health, but at least her doting husband is staying by her side every step of the way.

One of the most important stories of the week belongs to Frankie Muniz, the 27-year-old star of Malcolm in The Middle. He suffered a mini-stroke late last week, but it has not yet been revealed as to what the cause was behind his terrible health scare, so be sure to find all of the most important details in Globe’s latest edition. Jovan Belcher takes the top left corner with news about his murder-suicide that rocked the sporting world. According to GLOBE, “Autopsy secrets” will be revealed in the latest issue that could shed new light on the heartbreaking story. GLOBE’s cover is rounded off with President Barack Obama’s alleged Hawaiian vacation scandal that is rocking the world.

GLOBE is the leader in Royal Family news, so be sure to grab a copy of the December 24th print edition and read all about the miracle behind Kate’s pregnancy! We trust GLOBE, so should you!