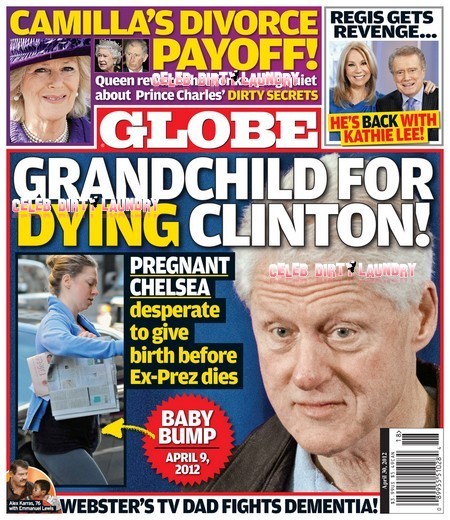 The current issue of Globe Magazine features the cover story ‘Grandchild for Dying Bill Clinton.’  Bill has progressive cardiovascular disease that has already required extensive open heart surgery.  He follows a highly restrictive diet and although he remains active Bill is in fragile health. This week the magazine has the scoop on Chelsea Clinton and her hubby Mark Mezvinsky expecting their first baby together.  They have the photos of her baby bump taken on April 9th, 2012.

Chelsea is the only child of former U.S. President Bill Clinton and current U.S. Secretary of State Hillary Rodham Clinton. She is currently serving as Special Correspondent for NBC News.  Chelsea is desperate to give her Dad a grandchild before he dies.

Her Dad Bill really wants to be a granddad and knowing Chelsea and Mark have baby plans in the works has given him a real boost.  Bill’s failing health has her so worried that she and Marc agreed to have a baby sooner instead of later because she knows it means everything to her father.  Congrats to Chelsea and Mark!

Also included in this week’s issue they have all the details on Camilla Parker-Bowles divorce payoff.  Prince Charles’ Mom Queen Elizabeth II has paid Camilla off to keep her mouth closed about all Charles dirty little secrets. It has been rumored that Camilla and Charles have secretly split and are living separate lives.  Camilla has allegedly accepted a $50,000,000 payment to pretend that everything is okay until after the Queen’s Diamond Jubilee this summer.

To find out all this and more head out to buy the current issue of Globe Magazine or alternatively you can subscribe on line HERE!