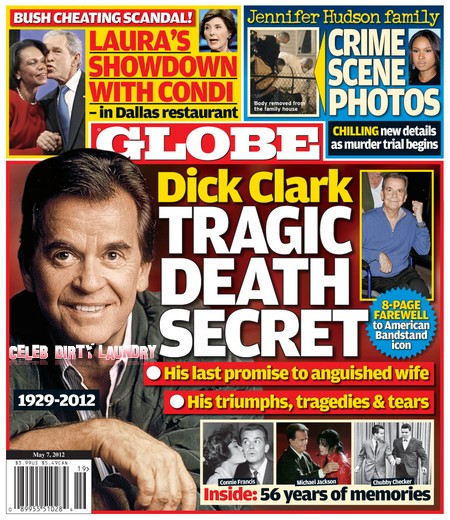 The current issue of GLOBE Magazine features the exciting cover story revelation of Dick Clark’s Tragic Death Secret!  We learn in the special 8 page farewell to America’s Bandstand icon all about his last promise to his anguished wife.

Also revealed will be the complete details of his triumphs, tragedies and tears.  All 56 years of Dick’s professional memories and unique experiences will be discussed in never before revealed detail!  These experiences range from Dick’s interactions within Connie Francis and  Chubby Checker of The Twist fame – to the late great Michael Jackson.

Clark’s health had been on the decline since he suffered a significant stroke in 2004 which forced him to retire from his hosting gig at “New Years’ Rockin’ Eve,” which he created in 1972.  Dick occupied a unique place in American music and showbiz history – he has no equal.

The current GLOBE cover also promises to burst wide open the cheating scandal between George W. Bush and Condoleezza Rice!  Laura Bush and Condi apparently had an ugly showdown in a Dallas restaurant and GLOBE has all the details for us in the current issue.

We have all been watching closely as the murder trial of William Balfour opens. The man is accused of murdering much of Jennifer Hudson’s family and she is bravely attending the trial – even testifying against the accused.  GLOBE exposes chilling new details of the horrific crime scene as the murder trial begins.  Inside the current issue we will see actual photos of the crime scene itself.

This week’s GLOBE is a must see.  There is no substitute for their detailed investigative reporting.  I’ll be getting my copy as soon as GLOBE hits the newsstands.  Nobody gets inside a story like GLOBE!