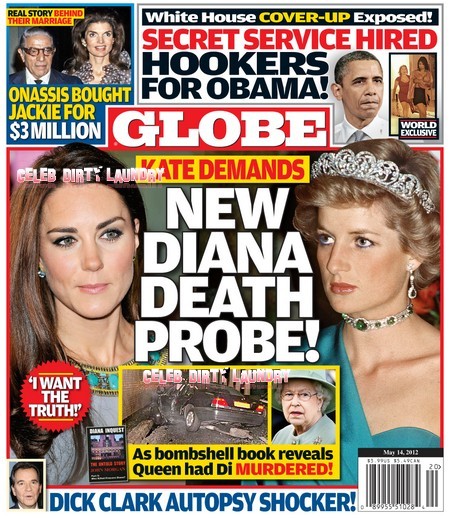 Kate Middleton fearing for her own life and that of sister Pippa Middleton has ordered a new inquest into the death of Lady Diana Spencer, the Princess of Wales.  Many suspected that the royal family was somehow involved in Lady Di’s tragic automobile accident that killed her along with her billionaire boyfriend, Dodi Fayed, and her driver and security guard, Henri Paul.   Dodi’s father, Mohamed Al-Fayed, publicly accused Queen Elizabeth II’s husband, Prince Philip, The Duke of Edinburgh and British Secret Service of plotting the fatal crash.

Lady Di was a major thorn in the side of the royal family as she traipsed around Europe like a loose starlet after her scandalous divorce from Prince Charles.  Although there was never any official proof of royal involvement in Lady Di’s violent and tragic death there remain many unanswered questions.

The cover of this week’s GLOBE states that ‘Kate Demands New Diana Death Probe’ as a bombshell book reveals at last that Queen Elizabeth II had Di murdered!  Kate says that she ‘wants the truth’ and who can blame her?  We all know that Kate has so far looked up to Prince William’s grandmother, the Queen, as guide to her own behavior.  But if she fears that the Queen was involved in Lady Di’s demise then that respect would rapidly change to fear and loathing.

The scandal involving Pippa on her weekend of drunken and kinky debauchery in Paris has tainted Kate and made her sister an outcast in royal circles.  Could Kate possibly worry for her own safety or that of her dear sister?   Does Kate fear that if Pippa refuses to settle down and live more conservatively then the Queen might order something done?  Something serious?

In this issue we also learn about Dick Clark’s autopsy shocker.  What gruesome details have we yet to discover?

The GLOBE also promises to explain how Aristotle Onassis bought slain President Kennedy’s wife Jackie for $3 million.  Apparently Jackie and Aristotle had a prenup that went so far as to specify a schedule for sex!

Leave it to GLOBE to heat up our anticipation for the print edition to the boiling point.  When GLOBE investigates and reports on a story you get the total truth – nothing is left out.