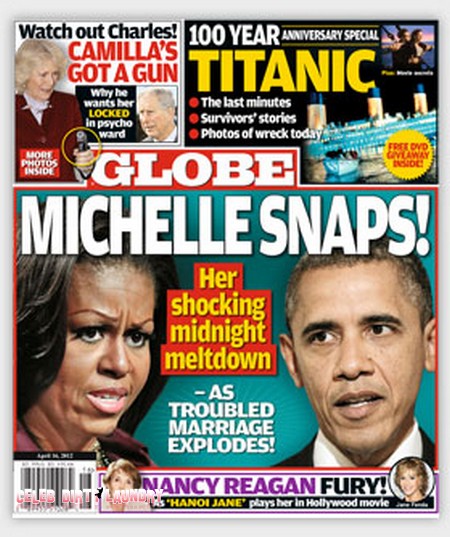 The April 16th, 2012 issue of Globe Magazine features the cover story ‘Michelle Snaps!.’  The magazine screams in big white letters that Michelle Obama has snapped in a midnight meltdown as her marriage to Barack Obama explodes and of course they have all the shocking details for us.

Globe has the scoop: A special GLOBE investigation reveals that Barack and Michelle Obama’s marriage has exploded. Their fragile relationship finally shattered in a shocking midnight phone call during Michelle’s trip to Las Vegas. Find out what the First Lady and President said and why insiders now believe the marriage can’t be saved – all in the new GLOBE.

The problem with the story is in December Globe released a released a bombshell and reported that Michelle Obama was having a “steamy secret affair” with a Secret Service Agent.  At the time the allegations were, of course, unsubstantiated and eventually they just fizzled out.  So it seems like this news is just the magazine recycling old news.  What do you think is the Obama marriage in trouble or is this just groundless speculation by Globe to sell magazine?

Also included in this week’s magazine they claim Camilla has been up to strange antics and  bizarre  behaviour and this has people worrying.    Her recent outburst with a gun has Prince Charles fearing she’s mentally ill and should be shipped off to a psycho ward.

To find out all this and more pick up the current issue of Globe Magazine.