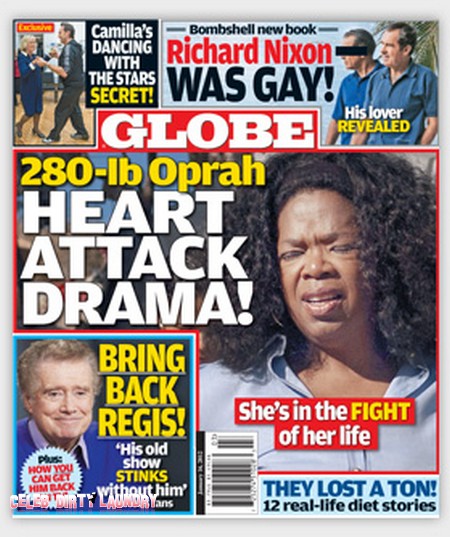 The current issue of Globe Magazine features the cover story ‘280-lb Oprah Heart Attack Drama.’   The magazine claims that talk show host Oprah Winfrey is in a fight for her life because her weight has ballooned out of control. Can you imagine the strain someone like Oprah put on herself with her yo-yo cycle of dieting and weight loss followed by ballooning again?

Globe has more: Oprah Winfrey’s weight has ballooned to 280 and with her breakneck schedule and the stress of trying to save her flopping Oprah Winfrey Network, insiders fear she’s headed for an early grave. Experts tell GLOBE the TV mogul is at risk for a heart attack. Learn all about her alarming health crisis – only in the new GLOBE.

The magazine claims Oprah is now at a whopping 280 lbs and has got there by binge eating. Oprah is quick to give advice and act as though she were a regular font of wisdom but until she gets her own weight issues under control her position as the ‘wise one’ must be doubted. Her doctors have ordered her to diet or die!

This week’s issue included 12 other real-life diet stories and how they lost a ton.  Also included in this week’s issue Globe has the scoop on a new book that claims Richard Nixon carried on gay love affair and also beat his First Lady wife.

To find out all this and more, pick up the current issue of Globe Magazine.