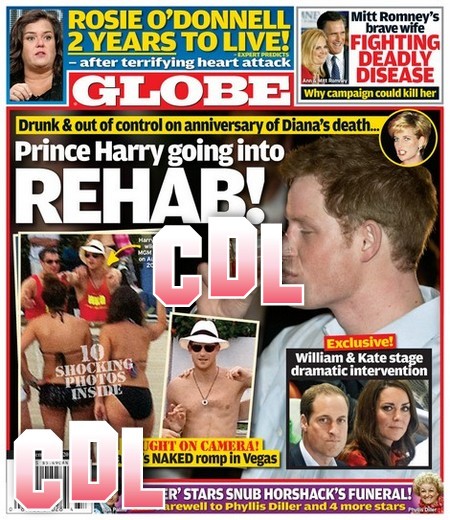 Prince Harry is in deep trouble and it isn’t because his Grandmother, Queen Elizabeth II, is angry at him.  GLOBE exclusively reports that a Prince Harry rehab is in the offing.  Prince Harry is being forced to enter rehab as his substance abuse has reached life-threatening proportions.  Prince Harry was caught on camera naked in Las Vegas while partying with casual pals he picked up at the casino bar.  While the release of these photos was a terrible blow to the Palace, their primary concern is to secure Harry’s health and well-being.  To achieve this end, a meeting took place at the highest levels of British government and royalty – and the Queen must have signed off an intervention.

GLOBE reports that Kate Middleton and Prince William stepped up to the plate for their beloved, but troubled, Prince Harry! Kate and William staged a dramatic intervention forcing Harry to confront his substance abuse head-on.  GLOBE has all the shocking details of that confrontation in the September 10th Print Edition – along with 10 photos that will absolutely devastate you!

As upset as Queen Elizabeth is at Harry for embarrassing the royal family yet again, her primary concern is that Harry doesn’t face a tragic end like his mother, Princess Diana.  Diana died after a night of hard partying as she and her boyfriend, Dodi Fayed, crashed in their limo driven by bodyguard, Henri Paul – subsequent investigation showed that all three were under the influence of alcohol at the time of the accident.

What terrifies the royals is their fear that Harry is binge drinking as his morale dissolves in the face of the anniversary of his mother death, August 31st.  That is why there is no time to waste in getting the Prince into a rehabilitation program.  When Harry is as out of control as he appeared to be in Las Vegas his security team can no longer be trusted to keep him safe.  As GLOBE points out, there is nobody who can influence Harry more effectively than Kate and Will.

This week’s edition of GLOBE also features a sad story on Rosie O’Donnell – it seems that post heart attack the morbidly obese star has only 2 years left to live.

There are many enthralling stories reported in GLOBE’s typically in-depth style in this week’s edition.  But outstanding for me is that GLOBE was capable of exclusively obtaining the inside details on Prince Harry’s rehab plans and the intervention that made it possible.  There is nothing that Kate Middleton and Prince William wouldn’t do for Prince Harry.  Likewise, there is nothing that stops GLOBE from reporting the most exciting breaking news – regardless of how difficult and hard to find it may be.  When I read my copy of GLOBE this week it will feel like I am right there with Kate and Will as they convince Harry that he needs professional help in the form of rehabilitation. Imagine being a fly on the wall during that meeting!