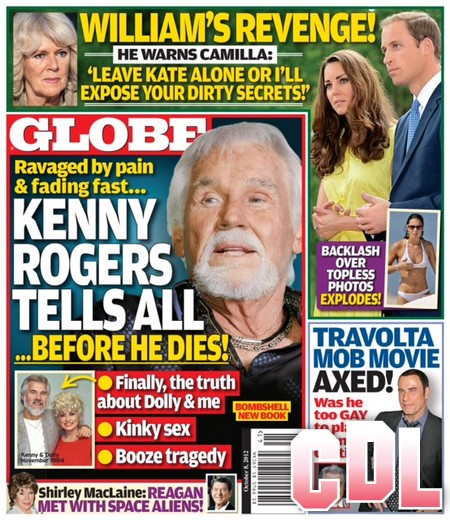 Camilla Parker-Bowles has been determined to destroy Kate Middleton since Prince William decided to marry his girlfriend of many years.  Camilla has attempted to make Kate’s live a misery using a variety of nasty techniques centered upon pointing out Kate’s commoner background.  But now that Kate’s bare breasts are all over the Internet and on newsstands everywhere Camilla has ratcheted up her already bitter war against the Duchess of Cambridge.  As we reported at Celeb Dirty Laundry Camilla’s barbed comments to Kate about how she has shamed the monarchy and disgusted Queen Elizabeth have left Kate in a panicked state and William prepared to strike back!

GLOBE explains that Prince William has warned cruel Camilla that if she won’t back off of his lovely wife then he will hit her where it hurts!  Camilla has a whole closet full of ugly skeletons that she would do anything to keep hidden.  Since she has succeeded in convincing Queen Elizabeth that Prince Charles, rather than his much more qualified and popular son, Prince William (no, not Prince Harry – LOL), should be the next monarch, the last thing she wants is for her ugly past to be revealed.  But that is exactly what desperate William has threatened if Camilla won’t immediately leave Kate in peace.

We can’t wait to read the October 8th GLOBE print edition to learn the details of this ongoing royal struggle between Camilla on the one hand, and Kate and Will on the other.  What do you think Camilla is so desperate to hide?

The GLOBE cover features a special report: ‘Kenny Rogers Tells All Before He Dies’ in which we get the lowdown on his rumored affair with Dolly Parton!  The kinky sex, the booze tragedy, everything is fair game in this exclusive story.

And what about John Travolta?  GLOBE breaks the story that Travolta has been axed from the John Gotti Jr. movie, ‘Gotti: In the Shadow of My Father’ in which Travolta was meant to play John Gotti Jr.  GLOBE suggests that Travolta’s ongoing scandal involving the solicitation of gay sex and the harassment of various people in his pursuit of the same may have led to his dismissal.

I’m anxious to get my copy of this week’s GLOBE as another incredible lineup of features await me!  GLOBE manages to get inside the leading stories and report back to us all the details regardless of how shocking the truth may be.  When other news sources tend to shy away from the tough stuff – those events that cross into territory difficult to cover – GLOBE stands firm in its pursuit of the truth.  GLOBE puts its readers first no matter what the cost.  With GLOBE I know my week and weekend will be enriched with hours of great reading!