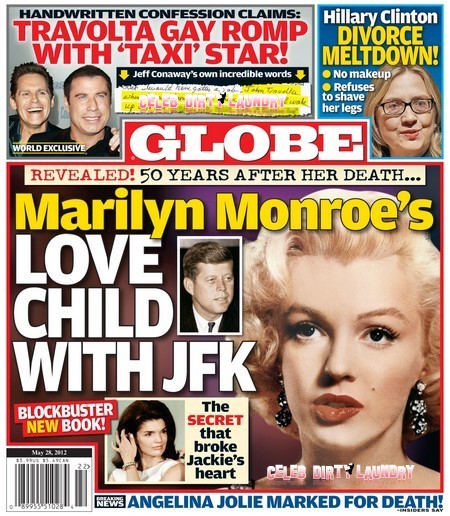 The current issue of GLOBE reveals that President JFK had a love child with Marilyn Monroe!  50 years after Marilyn’s very suspicious death – which has never been properly explained – we learn from a startling new blockbuster book that the star gave birth to President Kennedy’s love child.  This is the previously suppressed secret that broke Jackie’s heart.

We can’t wait to learn all of the details surrounding this story.  The print edition of GLOBE will no doubt satisfy our curiosity as to the particulars of this surprise outcome to the President’s affair with Hollywood’s sexist star ever.  What happened to the baby? Where is the love child now?

The GLOBE cover also promises to expose details and name names in the scandal involving John Travolta’s alleged gay sexual predation.  Now that Gloria Allred has supposedly stepped up to represent the first masseur – John Doe 1 – we expect Travolta and his lawyer, Marty Singer, to have a hard time denying the charges.  Globe reveals in a world exclusive that the late Jeff Conway, star of the popular TV series ‘Taxi,’ was one of Travolta’s clandestine gay lovers.  GLOBE presents a detailed confession by Conway of his romp with Travolta in their print edition.

There is more bad news revealed on the GLOBE cover about former President Bill Clinton’s relationship with his wife, Hillary.  The current Secretary of State, Hillary Rodham Clinton, is refusing to wear make-up – of which she could sure use a major helping – and she won’t shave her legs!  All of this is part of her campaign to divorce Bill according to GLOBE.  Hillary must still be fuming after the humiliation Bill put her through in front of the entire world when he confessed to his White House sexual affair with Monica Lewinsky.

The information that GLOBE presents through their diligent efforts to uncover the truth makes it a must read for me.  This week’s edition promises to be absolutely amazing reading.  I’ll be buying my copy the second GLOBE hits the newsstands.

To get your copy delivered right to your door, go here to SUBSCRIBE!