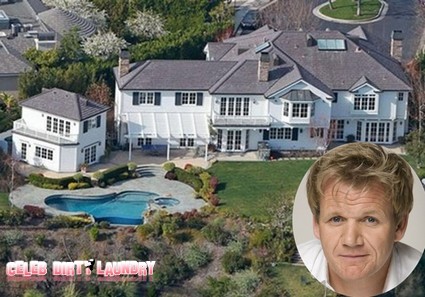 The main “kitchen” man, Gordon Ramsay who is well known for yelling at a lot of chefs, has just picked up the keys to an amazing five-bedroom family home located near Beverly Hills, that cost him over 6 million dollars. I got to say that the house looks very nice; the best part about it for me is the trees and the steps in the back.

This home will allow Ramsay and his wife Tana, to take advantage of the popularity he’s gained in the United States.   Ramsay has had his share of troubles, having fought a court battle against his father-in-law Chris Hutcheson, followed with him getting fired as a chief executive of his restaurant empire. Also, he had many restaurant closures and a decline in revenue – but that didn’t keep Ramsay down for long.

Ramsay’s US TV career has been going one way, up! Master Chef will be returning for a third season and he has a new show “Hotel Hell” that will be launching on Fox sometime around March 2012. That’s not all, Ramsay will also be opening a new restaurant in Las Vegas some time this spring and it’s been said that he will be spending more and more time in America, good reason for the new home.

Gordon Ramsay in my opinion is one of the most entertaining chefs I’ve ever seen. I love it when he yells at the chefs, teaching them and showing the mistakes they’ve made. Seriously I wish I was paid to yell at people for a career, it would be a hell of a fun job!