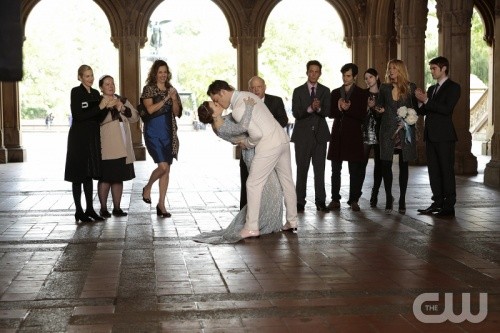 Tonight is the CW two hour special series finale of GOSSIP GIRL called, “New York, I Love You XOXO.”  On the last episode of Gossip Girl after a run-in with an increasingly paranoid Bart, Blair grew alarmingly concerned for Chuck’s safety. However, feeling confident that his father would never hurt him, Chuck made a deal that could change his life.

Wanting to make things better for Chuck, Blair devised a plan with the help of Serena, Georgina  and Sage to try and get what they needed out of Bart. Meanwhile, Nate’s financial dilemma finally landed him in a place that he never thought he would be.

On tonight’s show – GOSSIP GIRL IDENTITY REVEALED IN SERIES FINALE – The Series Finale begins with the stars and executive producers bidding farewell to the Upper East Side in a look back at the show’s many unforgettable moments. Then, in a fashionable farewell to remember, our favorite Upper East Siders join forces for one last soiree, and the shocking identity of Gossip Girl is finally revealed. Blake Lively, Leighton Meester, Penn Badgley, Ed Westwick, Chace Crawford, Kaylee DeFer, Kelly Rutherford and Matthew Settle star. Mark Piznarski directed the episode written by Stephanie Savage.

Chuck and Blair watch Bart go over the ledge of the building and flee the scene. They calmly leave as the cops arrive. Georgina arrives and asks the cops what’s going on. Chuck calls someone on the phone, instructing them to tell Chuck what to do. Blair calls Georgina.

Dan texts Daphne and says he will have the final chapter for her tomorrow. Serena, meanwhile, reads the chapter that Dan left for her.

Sage and Nate are still trying to figure out who Gossip Girl is. Nate watches on TV the coverage of Bart dying although his name is being withheld. Lily is notified of Bart’s death. Ivy happily tells someone on the phone that Bart is dead and it is now safe for her to be seen in the city.

Chuck and Blair are shown to be hiding in the trunk of the car. Chuck is considered a person of interest in the murder. Nate tells the cops that he didn’t see anything at the party. The police begin to question the other characters, namely Eleanor, Nate and Cyrus, Darota, about Blair’s relationship with Chuck and that Blair may be an accomplice.

Jack tells Chuck that al lot of people are looking for him. He had a tracking device on Chuck’s limo. Jack wants to know if Chuck killed Bart or not. Blair argues that Chuck acted in self defense. Chuck says he doesn’t feel guilty which doesn’t mean he’s not. Jack suggests they get married to invoke spousal privilege. Blair wants to marry Chuck but he needs convincing. Chucks says life with her could never be boring and gets down on bended knee to properly propose.

Serena shows up to see Dan. Serena wants to know if what he wrote is true and which is the real Dan.

Lily is hounded into the penthouse building. William offers his condolences and offers his support as she plans Bart’s second funeral. Lily says she would be grateful to have him by her side. Ivy calls him.

Dan explains to Serena how he accidentally got invited to one of her parties. He didn’t want to leave because that’s when he saw her. He and Serena engaged in some banter. Serena doesn’t remember because she had too much champagne.

Nate can pay off the rest of his debt for the Spectator now that Bart is dead.

Jack gets Blair and Chuck a marriage license as they get ready to wed at City Hall. Chuck knows that this is not the over the top wedding she wants. Blair says she has already had all that but he does not want to start the rest of their life this way.

Jack, while riding backseat in a limo, approaches Georgia as she’s walking the streets of New York. Jack says that Blair says that Georgina is quite the schemer. She says it’s true.

William pretends not to know Ivy. Ivy claims that William is in love with her and that they’ve been working together for months.  She claims to have texts. Lily excuses herself. William says that he is getting the love of his life back. William tells Ivy to go back to the Queen of the Swamp people in Florida while Ivy shrieks that she loves him.

Chuck and Blair have arranged a wedding for their loved ones.

Serena tells Blair that she and Dan trying to work things out. Blair trashes Dan and says that he will never be a part of their group and can’t be forgiven the way Chuck has; that Serena will never marry someone without any power. Dan overhears Blair running him down.

Dan gives Nate his final chapter which is about Gossip Girl. Nate thanks Dan. Nate then overhears two tweens calling the cops to tell them where Blair and Chuck are.  Cyrus quickly marries Blair and Chuck as the cops are approaching. The cops take the newlyweds away.

Kristen Bell makes a cameo, as well as Mayor Michael Bloomberg. Gossip Girl is revealed to be Dan!  Jack gives him kudos. Rufus can’t believe that Dan put all of that gossip on the site, especially about Jenny. Dan says Jenny has known for years.

The cops let the newlyweds go.

Serena is fine with the revelation that Dan is Gossip Girl. Blair doesn’t think it’s funny that Dan was the one pulling the strings this entire time.  Dan says Gossip Girl is dead now.