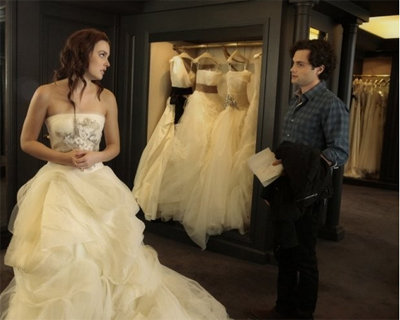 When we last left the Gossip Girl characters in the mid-season finale, Blair (Leighton Meester) and Chuck (Ed Westwick) finally, finally admitted what the audience has known all along: that they belong together. Blair decided to call off her wedding to Prince Louis (Hugo Becker) of Monaco, and Chair was seen speeding away in a town car until a pack of paparazzi caused their vehicle to crash.

However, in newly released spoiler photos for Season 5’s Episode 11, which airs on January 16th, Blair is pictured trying on wedding gowns for Dan (Penn Badgley,) which makes us think that she never got around to giving Louis the “It’s not you, it’s me…and Chuck” speech.

So, does that mean that she changed her mind about running away with Chuck, or did Mr. Bass die tragically at the hospital? Fortunately, for Chair fans, Chuck is seen in other spoiler photos, like this one, where Louis is giving Gossip Girl‘s resident bad boy an ominous look. So, something else must have caused Blair to still go through with the wedding.

Could it be her unborn baby or Louis’ scheming French mother? We guess we’ll have to wait until January 16th to find out!