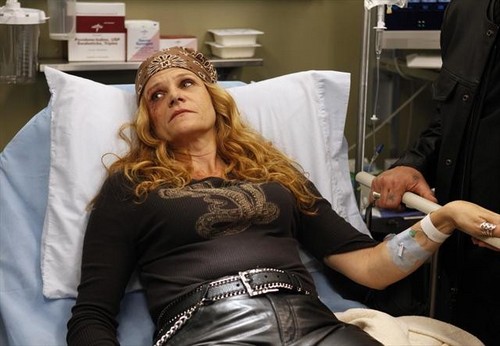 ABC has leaked the news of a major break-up on GREY’S ANATOMY at Seattle Grace Mercy West, but who will it be??  They say it’s a beloved couple – but that could cover several on the show. So who’s calling it quits? There are several different possibilities:

#1 Derek and Meredith – This is easily the most beloved couple on the long running Thursday evening drama, but they seem so stable right now. Remember, Meredith just told Derek on the last episode that she’s finally pregnant so that’s good news, but since they’ve had fertility issues, the writers could easily end her pregnancy in a tragic miscarriage that could tear them apart. Infertility has been a big source of strife in their post-it note marriage.

The second major issue with them is his ongoing inability to operate. But guest star Neve Campbell has showed up as Derek’s sister Lizzie, ready to donate a nerve for surgery to repair his damaged hand. But if the surgery is unsuccessful, I could see Derek going off the deep end and that breaking them up as well.

#2 Arizona and Callie – Arizona’s been struggling since she lost her leg and is pushing the brunt of the blame onto Callie. But now that she’s perking up, it seems like things are getting better between them. But with those volatile ladies, you never know. The loss of McSteamy could come back to haunt them, Arizona could decide losing her leg predicates a bigger life change or (less likely) Callie could get impatient with Arizona keeping her at emotional or physical arm’s length. I don’t think the two have been intimate since Arizona’s leg was removed and that could be pivotal.

#3 Bailey and Ben – Bailey’s been on and off the fence about Ben a hundred times and now that their wedding is almost here, this would be a pivotal time to break up this fledgling couple. We all want Bailey to get a happily ever after and Ben seems perfect for her, so I’d hate for them to be the couple to split but Grey’s Anatomy does love wedding drama, so it’s a prime opportunity for a relationship crash and burn.

#4 Owen and Cristina – They’ve been broken up a good bit of this season and last episode, just when the ever-ornery Yang decides she’s maybe ready to try again with Owen, he dropped the D-word on her. Of course, we know that’s because of the conflict with the airplane accident lawsuit, but Cristina doesn’t know that – she just feels dumped. These two may yet reconcile again, but I kind of hope they’re the ones who are splitting for good. Poor Owen wants kids so bad and Cristina doesn’t seem likely to come round, even after her epiphany in frigid Minnesota, so my money’s on these two.

There are a few ancillary couples that the Grey’s leak might cover, but I hope it’s not them. It always aggravates me when a show promises the death of a “major character” and it’s someone who’s a recurring bit player or sidekick rather than a real major character.

But here goes on the secondary couples…

#5 April and Jackson – He dumped her when she was a little too excited to not be pregnant, but they’ve got great chemistry, so they could be on again, just to be off again. But on a spoiler clip from the next episode of Grey’s, Jackson’s stripping down to play doctor with intern Stephanie, so will this break he and April up for good or make her realize she let a good thing go too soon?

#6 Richard and Catherine – They’ve shown them off and on all season, but the ex-chief is enjoying a long distance romance with the other Dr. Avery – Catherine – Jackson’s mom. Jackson’s none too happy, particularly when they accidentally send their naughty emails to them. This relationship could fall apart at any time without causing any major upheavals since Catherine’s so rarely seen.

That’s it Grey’s fans! You’ll have to hold your breath and wonder until Season 9, Episode 10 “Things We Said Today” airs Thursday, January 10th at 9 pm. Official synopsis of the episode: Bailey puts her wedding day on hold and continues her efforts to save Adele’s life, Cristina and Owen remain undecided about their pending divorce, while Arizona and Callie try to get their spark back. Meanwhile, the hospital becomes inundated with a group of bikers after a horrible accident

Join us here for a live recap and in the meantime, share your predictions for who you think will be splitting up on Grey’s!  Also check out the sneak peek video and some photos from the episode below!