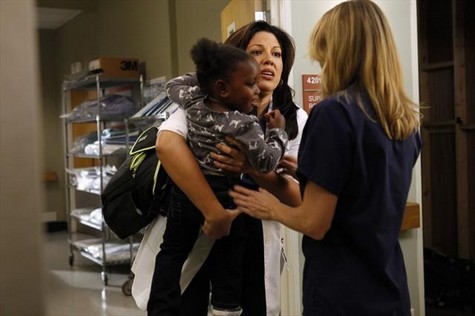 Grey’s Anatomy is one of those television series that just might be on until the end of time, and we’re quite glad about that. Grey’s Anatomy is well into season 9 and already we’ve seen some crazy cases, a ton of hospital let’s-have-sex-in-the-closet drama, and the residual effects of the traumatic plane crash that our fave doctors experienced at the end of last season. On last week’s episode we witnessed plenty of hot new drama, including Dr. Grey’s uncertainty on how to treat Derek now that he’s unable to operate. While she’s off working on once-in-a-lifetime surgeries, Derek is stuck teaching first year interns how to insert catheters.

Meanwhile, Dr. Yang continues to build a relationship with her new colleagues (it’s only a matter of time before she returns to Seattle Grace) and Arizona struggles to reconnect with Callie as she begins her arduous journey with her new prosthetic leg; however, the sun poked through the clouds at the end of the last episode and we saw Arizona attempt to open up, accept her pain, and begin to come to terms with her current situation. Her prosthetist is an empathetic individual, and his role in the upcoming episodes will undoubtedly be paramount as Arizona works toward reclaiming her position as Seattle Grace’s Top Dog Pediatrician.

On the next episode of Grey’s Anatomy, titled “Beautiful Doom,” another traumatic accident occurs, which leaves a patient in a disastrous condition. After a car runs over a civilian, Dr. Grey begins one of the most stressful cases of her career. But, as she works to save this woman, who’s holding on by a thread, she might be getting in over her head — and letting her emotions cloud her judgment. In the clip below, which highlight’s the episode’s main plot, the Chief says, “There’s a limit to how much this patient can take.” Grey says, “I’m trying to save her life!”

Will she save the patient’s life? As Dr. Yang muses in the promo, this might just be the end of Meredith’s career “if this thing goes south.” Let us know what you’re most looking forward to Season 9 Episode 5 “Beautiful Doom,” which airs November 8th at it’s usual time. Which relationships have you most agitated this season? Which characters are you rooting for? Hating?

“In this Meredith & Cristina-centric episode, the two friends continue to cope with life after the plane crash and their ever-growing responsibilities at their respective hospitals. As Meredith juggles taking care of Zola with a case that hits close to home, Cristina assists Dr. Thomas on a challenging heart surgery.”