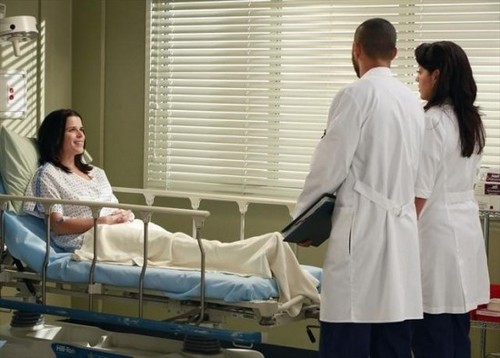 Tonight on ABC is an all new episode of GREY’S ANATOMY. Tonight’s show is called “Run Baby Run” and on tonight’s show doubts start to creep in as Bailey prepares for her big day. If you missed last week’s episode we have a full and detailed recap here for you.

On last week’s show the new batch of interns found themselves involved in all the drama at Seattle Grace: Meredith asked Heather to go above and beyond to help fix Derek’s hand; Cristina started a healthy competition between Stephanie and Leah, which inadvertently leads to a medical emergency for Cristina’s patient; Alex saw Jo in a new light as they worked to save a baby’s life, and April taught Shane a valuable lesson during “lumps and bumps” duty.

On tonight’s show as the rest of the doctors prepare for Bailey’s wedding, Richard helps her through a bout of pre-wedding jitters. Meanwhile, Lizzie butts heads with Meredith, and Callie and Jackson try to convince Derek to participate in a risky surgery that could fix his hand.

Tonight’s episode looks like it is going to be a great episode and you won’t want to miss it, so be sure to tune in for our live coverage of ABC’s “Grey’s Anatomy” Season 9 episode 9 at 9 PM EST! While you wait for our recap hit the comments and let us know what you think of Grey’s Anatomy season 9, so far? While you wait for the recap check out a few pics of tonight’s episode below.

Bailey is barking out orders and she is not happy.  She doesn’t let up until she’s assured an intern will not be working on her patient.  She asks Callie to be a bridesmaid, in her own roundabout way.

Alex is checking on a patient and the little boy doesn’t look good.

Avery is discussing a procedure with Derek’s sister Lizzy.  Lizzy clearly likes to push his buttons.

Derek and Meredith are preparing for the ultra sound and she admits that she hasn’t told anyone about the pregnancy.  She doesn’t want to since she’s going to miscarry anyway.  The ultrasounds technician begins and we can hear the heartbeat and see the baby.  Derek is all smiles.  Meredith won’t even look.  She’s turned away.

Callie lets Bailey know that she has a cute dress and this sets her off.  She begins a long list of complaints about Ben, her fiancé.  Callie tells her she can run and just leave him at the altar.  She’s joking of course.

Alex and his intern are discussing a patient.  She is wondering if she is being punished for revealing too much of her past.

Kempner doesn’t want to go to the wedding because she’s afraid she will break down with Avery their and Bailey in a gorgeous wedding dress.  Bailey acts like she understands but quickly informs her, “If I have to go, you have to go!”

Kempner talks to Avery and makes him take a date to the wedding.  She enlists an intern.

Lizzy confronts Meredith about her passiveness.  She lets her know that she is family and having as much family around as possible is important.  She reminds her that Zola is her niece and yet she was never invited to see her.  Meredith locks up and walks away.

Karev learns his intern is useless and he put way too much faith in her.

Arizona and Callie are discussing Bailey’s wedding.  Arizona would prefer to skip it because she can’t wear heels.  Callie helps her feel better about her missing leg, but you can tell she really feels bad for her.

It’s the morning of the wedding and Bailey is at the hospital.  She gets an offer to scrub in on a surgery to “take the edge off,” and she is more than excited.

Alex’s intern complains to Arizona about him.  “I don’t think Dr. Karev had any business having an intern perform that procedure.”  Arizona is mad, but not with Alex, with the intern.

Arizona confronts Alex.  She asks if he threatened to fire his intern if she botched the surgery.  He said no he was taking a page from her book, because Arizona would always throw him into major procedures and it built his confidence.  He says he was trying to build his intern’s confidence.

Callie is about to start the procedure on Derek’s hand.  They encourage each other.

Alex confronts the intern.  He tells her he doesn’t care about her sob story and that she needed to get the hell over it already.  He also lets her know that she has burned a bridge with him and that if she’s smart she won’t do that to anyone else.

Christina is angry that Owen is using the lawsuit as an excuse to end their marriage.  Owen admits that he is the one who chose a cheaper airline for the attending’s trip and he takes the blame for it crashing.  Christina tells him it isn’t his fault, but he can’t accept that.

Everyone’s getting ready for the wedding.    Callie has a mini breakdown because she is tired of Arizona complaining about her leg.  Arizona calms down and gets ready.

Bailey is trying to get to her car to drive herself to her wedding and her family is trying to stop her.  Weber shows up with a limo for her instead.  It’s super sweet.

Avery sees his intern / date ready for the wedding and he really likes her at this point.  Karev is angry that his blind date is the intern.

Bailey and Weber are on their way to the wedding when Weber gets a call that his wife is in the ER.  They show up to the hospital and Bailey takes over.

Everyone is wondering where the bride is.  Callie explains to the other bridesmaids that she may have inadvertently told Bailey to run if she had doubts.  Sam, her fiancé walks in.