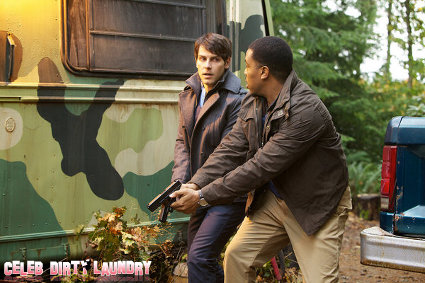 Grimm returned tonight for an all new episode, and CDL has a live, play-by-play recap for you. Tonight’s episode was called “Organ Grinder,” and lets just say that was incredibly accurate. There was lots of organ grinding and drying and stealing and selling.

So, let’s get on with it, shall we? Take a look at the recap below.

“We shall see the crumbs of bread . . . and they will show us our way home again,” is the quote that opens the show. It is a quote taken from  Hansel and Gretel, one of the Brothers Grimm’s most famous tales.

We see two people–probably friends–running through the forest at night time. They struggle and are running from a creature, one that hasn’t been seen on the show before. It’s bird like, has claws.  A girl gets thrown in a fire pit, one of the boys gets caught. It cuts to daylight and one of the kids that was running is now dead . . . floating in a river.

Over a cup of coffee with Monroe, Nick says that he wants to tell Juliette that he is a Grimm. But Monroe heavily–heavily–discourages him and says that a vast majority of mortals simply wouldn’t be able to process that kind of revelation. Hank and Nick get called to a crime scene and find the body of the young man who was killed at the show’s beginning. His body is pale and Nick discovers a rather interesting wound behind the victim’s right ear: two puncture wounds that resemble a vampire bit. And he’s holding puka shells in his hand.

The medical examiner discovers that the victim had consumed/ingested a heavy amount of blood. The puncture wounds are determined to be holes made by IV needles.

Hank and Nick go check out the victim’s PO Box and see a kid walk into the shop wearing puka shells. The boy tells the cops that a girl named Gracie made the necklaces. Hank and Nick go out to find Gracie sitting on a blanket selling the necklaces and question her. Gracie’s brother comes over, immediately defensive–angry.

After getting a tip from Gracie and her bro, Hank and Nick visit a free clinic. They find out that Steven Bamford (the vic) was treated there for a spider bite. Next, they question the doctor, a pretty woman who goes by the name of Vanessa Levine. And she immediately gets my vote for HAD SOMETHING TO DO WITH IT/IS PROB MOST DEFS A CRAZY CREATURE!

Hank and Nick get called in for a car crash. They both wonder why they’re getting called in for this accident, as it’s not a homicide, but when they get to the scene of the crime they discover an ice chest filled with organs. Hearts, intestines, the whole nine yards. The driver is pulled out from the wrecked, overturned car and Nick’s spidey–er, I mean Grimm senses go off.

Hank and Nick do some investigative work on the guy that just got in the car crash.

Nick, while doing some investigative work in his awesome little metal trailer, discovers that the creature he saw at the crash site is a GYRRE (don’t know if that is the correct spelling, and couldn’t find it anywhere; if any of you know, feel free to leave in the comments). He calls Monroe and asks him what he’s doing for dinner. The two share a funny dinner together. Monroe tells Nick that humans are like “exotic creatures” and their organs can offer special effects/enhancements to Grimm creatures.

Monroe goes to a “dealer” he knows and purchases a bag of ground-up gallbladder for Nick–to use as evidence. Nick’s lab identifies the substance as human organ and Nick returns to the shop Monroe led him to. He interrogates the shop owner. The guy, a Grimm creature, runs, but Nick catches him. The owner/dealer tells Nick when his next shipment of organs was supposed to arrive. It never did. Turns out the guy he bought from was the man who got in the car crash.

Nick, being such a nice guy, wants to take Gracie and her brother (the two homeless teens we met earlier in the show) out for dinner. Juliette tags along. The kids are starving. They talk about the kids that disappeared, and Nick wonders if others have vanished as well. Gracie says yes, that people in a white van often time come and offer kids–particularly homeless teens–jobs. And they never return. Nick gives her a card and tells her to call him if he or her brother ever see that van again.

After the show comes back from commercial, we see Gracie at the clinic. WITH THAT DOCTOR WHO I THINK IS BAD NEWS. Gracie tells the doctor everything that happened with Nick and Juliette. She looks nervous.

Hank, Nick, and the captain check out a sketchy trailer in the woods. The person inside fires at them, but the captain fires back and kills the attacker. In the back of the trailer, they find a secret room where human organs are drying. The dead guy’s phone is ringing. Nick calls back the number, and guess who answers . . . . . . . . . the free clinic.

Meanwhile, we see Gracie and her brother. A man confronts them and the white van drives up behind them. They are captured and taken away.

The white van pulls up to a giant red house, barn-esque in style. It’s the same house that was seen in the beginning. Gracie drops a trail of her puca shells (correlates to the opening quote).

Nick and Hank go visit the free clinic, only to find everyone gone.

Meanwhile, we cut back to the house only to see Dr. Valerie operating on kids, harvesting organs.

Nick and Hank, and a whole horde of cops, show up just in time. Dr. Valerie runs away. Nick goes after her. She’s hiding in a tree. When she jumps him, they duke it out. As they fight, she falls into a pit of fire. 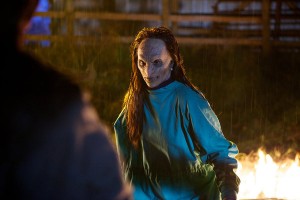 The captain returns to his office to find a package on his desk. It’s an ear. He has a flashback to the moment when he sliced off the ear of that reaper a few episodes back. He gets a mysterious phone call. There’s a deep voice on the other line. Now, we’ve always know there to be a subplot going on, one involving the captain and his duties with some secret society. The man talks about how a Grimm running around by himself not doing what he’s supposed to do (AKA killing every creature he finds), is upsetting the balance of things . . . “Next time, why don’t you deliver your message in person,” the captain says.

There you have it folks, now you’re caught up with Grimm! If you watched the show let us know what you thought and what you’re most excited about for upcoming episodes. I can tell you one thing, I’m getting very anxious to find out what’s going down with the Captain and his employers/organization.

Now, I’m a native Portlander, so I love seeing all the scenic shots and filming locations. What do y’all think of Portland? Do you think it provides a good atmosphere for the show?