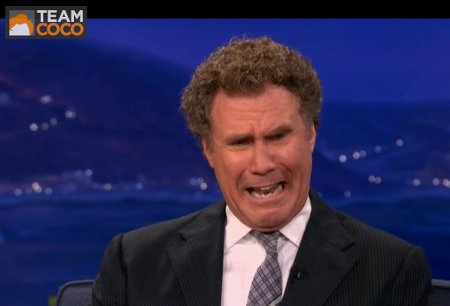 It appears as though celebrities are also being hit hard by the devastating cheating scandal between Kristen Stewart and her Snow White and the Huntsman director Rupert Sanders. Kristen’s longtime boyfriend, Robert Pattinson, is out of the picture, leaving all of the Twilight fans’ lives in shambles –- and Will Ferrell is no exception!

Will visited the set of Conan Thursday night to promote his new film, The Campaign, and while Will is usually a barrel of laughs, the comedian was visibly (and hilariously) distraught. Ferrell, not one to ‘hide’ his emotions, explained to Conan what had him so upset.

“I don’t know if you follow the news at all but there’s this actress, Kristen Stewart –- KStew,” he said. “She had a boyfriend, right? Robert Pattinson, he’s RPatz. And they’re broken up. They’re not going to get back together ever. They were in love. And she just threw it all away!”

Poor, poor Will! And I thought I had it bad! I know how you feel though, my friend; it has been quite the shock on us all. Like my friends have done, Conan assured Ferrell that everything would be fine. And like myself, this only further fueled Ferrell’s rage.

“It’s not going to be fine, ever. What they had was so special, you don’t even know! You would never know.”

It seems that Will and I have a lot in common. He even directed his hate and anger specifically towards Kristen, going as far as calling her a ‘Trampire’. Classic Will, very classic. I couldn’t have done better myself if I tried. Take a look at Will’s comical and passionate breakdown below: