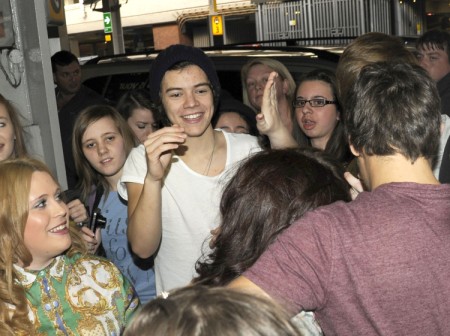 Harry Styles isn’t a fan of putting his John Hancock on his fans’ boobs.

They’re some of the great pairs of life: moms and apple pies, Oreos and milk, boobs and rock stars but, according to HollywoodLife.com, Harry’s done putting his mark on bare jugs.

“I’ve signed a couple of boobs before!” the 18-year-old told Tops Of The Pops magazine. “Although I thought that was a little bit inappropriate to be honest. I’d rather sign a piece of paper than a part of someone’s body!”

But that doesn’t mean the English gentleman and his One Direction bandmates can’t appreciate a nice pair from afar especially since it’s a hazard of the trade for internationally successful boybands with an overzealous female fan base.

“We’ve had a few flashers — but we’re not encouraging it, or deterring it!” Niall Horan told Contact Music. “The craziest thing was supporting US boyband Big Time Rush. All the fans were wearing our T-shirts and holding One Direction banners, too.”

Is Harry shying away because there’s a special someone in his life? After breaking up with older woman, Caroline Flack, Harry was spotted in New Zealand kissing American model, Emma Ostilly, but Harry’s mom assures girls around the globe that he is single.

“It’s over with Caroline and Harry hasn’t got a girlfriend at the moment, there isn’t anybody on the scene for him right now,” Anne Cox told Heat magazine. “He’ll make a very nice boyfriend when he’s ready. He’s very romantic but doesn’t want to tie himself down at the moment. Harry is obviously very handsome or ‘fit’ as the girls would say.”

You hear that ladies? He’s single so do yourselves a favor and stay classy by keeping the girls covered if you want a chance!