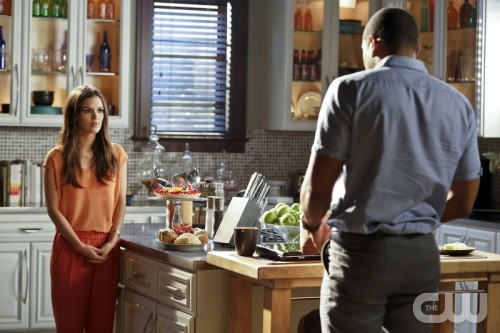 Tonight on the CW HART OF DIXIE returns with a whole new episode called “Sparks Fly.” On tonight’s show Wade (Wilson Bethel) struggles with feeling like he’s a placeholder in Zoe’s (Rachel Bilson) life, so he decides that they should go on a date.

On last week show Both Zoe and Lemon were having a difficult time accepting Lavon and Ruby’s new relationship, so they decided to find out Ruby’s true intentions. Wade agreed to supervise a Little Ranger’s camping trip to avoid a potentially awkward conversation with George.   However, when George unexpectedly showed up on the trip, Wade had nowhere to hide, and their talk made him see his relationship in a different light. Meanwhile, Brick wanted to take the next step in his relationship with Emily, but was shocked about who is not on board with the plan.

On tonight’s show GOING ONCE GOING TWICE — Wade (Wilson Bethel) struggles with feeling like he’s a placeholder in Zoe’s (Rachel Bilson) life, so he decides that they should go on a date. Despite Zoe’s apprehensions, she decides to bid on Wade’s basket at the upcoming charity picnic auction, but is surprised that she is not the only one interested. Lemon (Jaime King) mistakenly wins Lavon’s (Cress Williams) basket and decides to keep her true feelings for him to herself and instead offers some advice about his relationship with Ruby (guest star Golden Brooks). Meanwhile, George (Scott Porter) is interested in dating Tansy (guest star Mircea Monroe) and creates a basket that he hopes she will bid on. Tim Matheson also stars. Laura Bell Bundy guest stars. Norman Buckley directed the episode written by Jamie Gorenberg.

Tonight’s episode looks like it is going to be great and you won’t want to miss it, so be sure to tune in for our live coverage of CW’s Hart of Dixie at 8:00 PM EST! While you wait for our recap hit the comments and let us know what you think of Hart of Dixie Season 2, so far!

Zoey goes to see George and say he didn’t come by last night. She tries to make conversation about what is going on at her office but he is silent. She says she’ll see him later but he’s not sure. She leaves while he continues construction.

Lemon wants the waitress to take down the posters of Ruby and Lavon. She is approached by Dash as to why her father is not participating in the annual event Bachelor Auction. Dash says that her father needs to push aside his heartbreak and get back in the game.

Tansy goes to see George. She wants custody of her dog, Dolly Parton from her ex, Cole. He got her in the breakup and now his evil ex-girlfriend has her and now Dolly Parton is fat. Scott says that it may be a lnog shot without a legal document. Scott wants advice on the upcoming Bachelor auction. She gives him recipes. She calls him predictable in a good way. She thanks him for the advice and leaves.

Ruby and Lavon are together. She’s describing how cozy Texas will be but she says enough apartment talk when she notices that he is not interested in the topic. They start to tease each other about the upcoming Bachelor auction. She plans to spend serious money to win him. Zoey barges in and says she and Wade haven’t had sex in a week. Lavon says he’s got to go and leaves the two to talk even though they’ve had their differences. Ruby says this is too juicy not to discuss. Zoey thinks Wade is bored with her of her Space Mountain and is on to her next amusement park.

Lemon tells her Daddy that he knows she’s still hurt over Emily but he needs to get back out there and push heartbreak aside.

Wade tells Zoey that he knows he’s been acting weird. He thinks that they should go on a first date; that she can bid on him at the auction and it’s the perfect time for her to test drive him.

George is at the bar. Wade asks how things are with Tansy. He’s hoping she’ll bid on his basket.

Zoey tells her problems to her patients. At one point, Dr. Breeland thinks Zoey is asking him out.

At the auction, Lemon tells her Dad that they are opening themselves up to new opportunities. She runs into Dwight who wonders who she plans to bid on.

George tells Tansy that George Tucker is not who she thinks he is. Wade overhears.

Zoey arrives. She tells Ruby that Wade wants a real relationship and she’s freaking out. Ruby says this is the natural progression of relationships.

A bidding war erupts over George. Tansy wins for $35 and George is happy. She blushes.

Ruby is panicked because she can’t find Lavon’s basket. Lemon ends up buying the basket even though she believed she was bidding on someone else.

Another bidding war erupts, this time over Wade. Zoey is unsure if she should bid. Ruby tells her that her relationship with Wade is on the line. She bids too late and Magnolia wins him for $35.

Zoey apologizes to Wade for not bidding on his basket sooner. She wants to go on a date later because she’s sure Magnolia has a curfew.

George admits to Tansy that he rigged the game. Tansy realizes that she is the one George wanted to date.

Ruby says she got distracted which is why she didn’t bid on his basket. He thinks it was because she’s thinking about her apartment in Dallas. Ruby says that they can explain the situation to Lemon but he doesn’t want to go against the rules. Lavon and Lemon decide to go as friends.

Zoey offers to give Magnolia $50 in exchange for Wade’s basket. Magnolia makes these ridiculous demands but backs down for Taylor Swift tickets.

Lemon is touched by the way Lavon went out of his way to make it a romantic setting for Ruby.

Zoey brings a book of facts to her date with Wade as a bit of an icebreaker.

It’s still a very awkward date for Zoey and Wade. She finally gets frustrated with talking about crackers. He suggests wine. She says they should’ve started with it, but he doesn’t have a cork screw.

Dr.  Breeland is on his date with Shelby who got the highest bid on his basket.

Tansy feeds George this Taquito sandwich that he doesn’t like. She doesn’t like it either but just wanted to see if she could get him to eat it. George wants them to do something unpredictable. She wants to steal a dog.

Lavon laments to Lemon how his relationship with Ruby is going to work when she got an apartment in another city. Violins start to play; he realizes that he forgot to cancel the players. He tries to send them away but they are going to play for an hour since he paid.

Zoey and Wade finally begin to loosen up. They spot George and Tansy on their way to steal a dog. Zoey is shocked to learn that they are dating. He thinks she may be jealous. Zoey says that they are so different . Wade says that Zoey is saying that if two people didn’t have much in common, they can’t make it which starts a fight. Wade wants to know why she agreed to a date. Zoey wants to know why she pushed for it. Wade says he doesn’t want to evolve. He’s going back to his cave. He leaves.

Tansy sees Dolly Parton in a locked car. George tries to warn her of breaking and entering, but he ends of helping her. He crashes his hand through the window. George is bleeding from his hand afterwards and ask Zoey for help.

Lavon and Lemon are dancing as the violinist plays. Lavon says he sometimes thinks of them and that she was his first true love. He says that she taught him what a real relationship could be. Lemon has no doubt in her mind that he will find true happiness as she will as well. She thanks him for the lunch and leaves.

Zoey can’t believe that George committed a felony. George says it was a Class C. George knows stealing a dog was crazy but it was fun. The dog’s owner , Evelyn, wants Dolly Parton back. George uses legal jargon to fool Evelyn into convincing her that the dog is Tansy’s. A grateful Tansy hugs George and they kiss while Zoey watches. Zoey says that Tansy brings out a different side of him.

Shelby and Dr. Breeland are still enjoying their date and decides to dance.

Zoey tells Lavon that her first date with Wade was a disaster. She wonders why everyone has to change.  Lavon finds Ruby at his home. They share a drink. She knows he’s freaking out about her going to Dallas but she knows that they have what it takes to make it. Lavin says he realized tonight that he loves her. Ruby says she loves him too.

Zoey leaves a box at Wade’s. He sees her but they say nothing to each other.