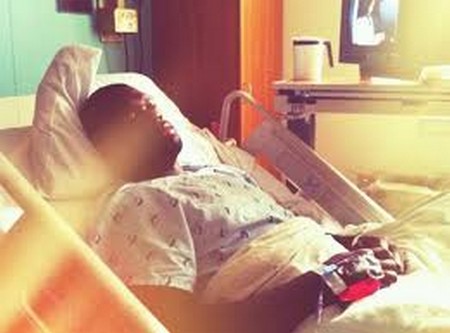 Rapper 50 Cent, certified eight times platinum for his album ‘Get Rich or Die Tryin‘, has been admitted into the hospital and apparently has a very serious illness requiring emergency surgery, according to MediaTakeOut. 50 was brought to a New York Hospital just two days ago for what was considered a mysterious sickness.

This illness has made 50 Cent cancel his appearance on radio station Hot 97; he was supposed to be promoting his new mixtape ‘Gangsta Grillz Lost Tape’ alongside DJ Drama. Even Floyd Mayweather Jr. who’s a good friend to 50 Cent said, “Please keep 50 Cent in your prayers he is in the hospital and he is extremely sick…we will remain positive.”

What is this illness you ask? Well it’s been said that 50 Cent has been diagnosed and that his small intestines have a blockage, after several tries at removing the blockage they have scheduled emergency surgery for him. Also the surgery has many risks, they have to remove a large amount of his intestines then reconnect the rest back together.

I honestly hope that 50 Cent gets through this just fine, he’s already a strong individual having being shot nine times after leaving drug dealing to pursue his rap career in 2000. So I believe he’ll get through this surgery just fine and continue with making his music.