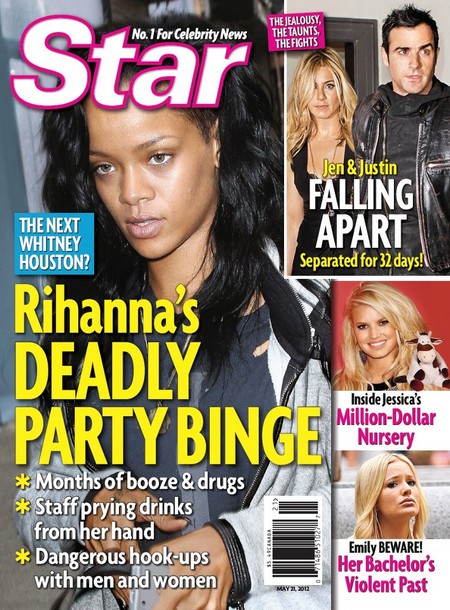 The current issue of Star Magazine features the cover story ‘Rihanna’s deadly party binge.’  The magazine reports that Rihanna has been boozing and drugging it up for months. Her staff has been trying to help her and they have even tried to pry drinks from her hand. She has been having dangerous hookups with women and men.

All of this has been causing friends to worry that she will be the next Whitney Houston.  Now what is causing Rihanna to spiral out of control?  Well she is reportedly insanely jealous that her ex-beau Chris Brown got a tattoo of his girlfriends face on his arm.

Star has the scoop: “When Chris got the tattoo, Rihanna freaked out. She’s been obsessed with the thought that he’s going to marry Karrueche and she’ll never be able to get back with him. She’s heartbroken and in a bad place.”  “Rihanna loves being a bad girl and shocking people.  She says she’s having fun, but it’s clear she’s acting out because she’s in a lot of emotional pain.”

Rihanna has been making it clear for some time that she is ready to let bygones be bygones and take Chris back but it looks like Chris has other things on his mind.

Also included in this week’s issue Star has the scoop on how Jennifer Aniston and her boyfriend Justin Theroux are falling apart.  As a matter of fact they claim they have been separated for 32 days.

They also have the scoop about Jessica Simpson’s new daughter Maxwell Drew’s million dollar nursery.  To find out all this and more, pick up the current issue of Star Magazine!