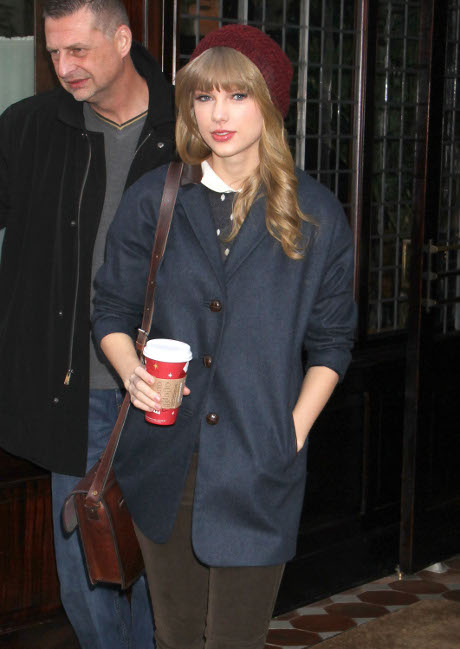 Taylor Swift has found love. Again. After dating the likes of Joe Jonas, Taylor Lautner, Jake Gyllenhaal, John Mayer, and recently Conor Kennedy, our favorite serial dater has added Harry Styles of One Direction to her diary of album material.

Taylor and Harry made their official debut as Haylor by holding hands for all the world to see after OD’s concert last night at Madison Square Garden. They were on their way to her hotel room at 4 a.m., doing the walk of pre shame before the paparazzi. Earlier in the evening, Taylor was honored by the Kennedy’s at the 2012 Ripple of Hope Award at the annual Robert F. Kennedy Gala. Conor wasn’t there to toast his ex. His absence made it that much easier for Taylor to have her cake, eat it and then sing karaoke later on with Harry to ‘Don’t Go Breaking My Heart’.

The jokes write themselves but at least 22 year old Taylor seems to be self aware of her prowess as a heartbreaker. The obsessed have also reacted furiously in Haylor bumping off Selena and Justin as the reigning tween supercouple. Taylor already blots out the sun as her own brand, but it’s a total eclipse with Harry as her man du jour. The coupling has caused teenage girls to lose faith in humanity, society and in their beloved Taylor. The country princess was formerly the icon who set the background to their pain but now she’s the cause of it because she’s taken Harry from them. It doesn’t matter that Harry doesn’t know they exist. That is just a minor detail to fangurls who claimed 18 year old Harry as their own. Now an older woman has just ruined their Tumblr fantasies.

After last night’s pap stroll featuring Haylor, the lid has really blown off the Pandora’s Box of denial. Granted, the death threats against Taylor indicated that some girls really did believe that Taylor was with their man, but it’s hard to deny photos. Well, some have claimed photoshopping, but the truth is slowly being digested. They’ll most likely make peace with reality by the time Taylor releases her fifth album, Wrong Direction.

To see them holding hands and entering Taylor’s hotel room earlier this morning click here. Recently, they were seen exiting the hotel  separately — as if they were trying to be discreet or something. Ha!