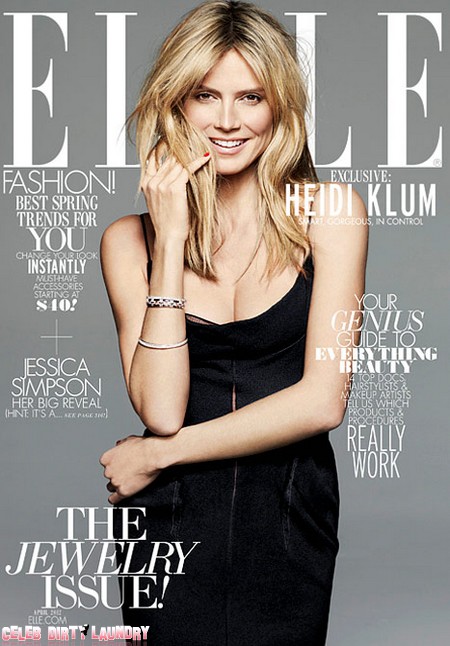 Heidi Klum has kept her lips ‘sealed’ (good god that was a good one) since separating from her husband Seal, whom she was married to for 7 years.  The couple has had fans speculating as to what went wrong with their seemingly perfect marriage – and why both of them were still wearing their wedding rings not long after announcing their separation.

The 38-year-old supermodel and host of Project Runway has finally decided to open up to Elle magazine in the April issue.  On her shocking split she says:

“I feel like I’m in the eye of the tornado. It’s emotions inside of your body that are a tornado. And then the outside world doing all this craziness — with you wanting it or not wanting it — is another tornado, but as hard as it is, so is life. And sometimes I think a curveball just comes at you. Instead of something straight that you catch, it hits you in the head from the side that you didn’t expect.”

What curveball are you referring to Heidi?  It seems as though there are still some things that are meant to be kept just between the couple.

“To the outside world, you don’t really share all the things that happen. You kind of share just the most amazing sides, but I don’t really want to get into any of that stuff. With my life, my family, my business — I want to go forward.”

Fair enough girl but gives us some juice!