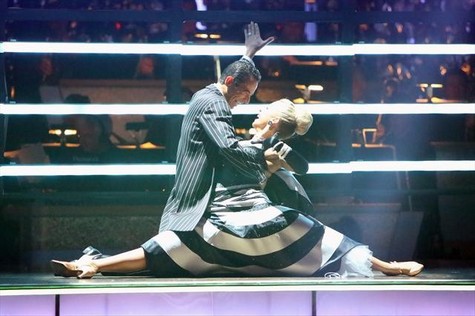 In what can only be described as a shocking elimination Helio Castroneves and Chelsie Hightower were eliminated during tonight’s double elimination on Dancing with the Stars.

On last night’s show Helio and Chelsie danced the Quickstep by Apolo Anton Ohno and Julianne Hough (Season 4). Their performance was also a personal best of the season, but was still not strong enough to push them into the front of the pack. Carrie Ann thought it was “so good”, while Bruno enjoyed it until the dress was stepped on and “it went down”. They scored 8.5 from all of three judges. This also slipped them into the middle of the pack with 25.5. They are currently in 8th place on the leader board with a total of 69.5 – 5.5 points behind the leaders, Giles and Peta. Their three week scores so far – 21.5, 23.0, 25.5

Are you as shocked as I am? Dancing With The Stars is not about the best competitor, it is clearly about popularity. What do you think, should they have been eliminated? Why didn’t the terrible Bristol Palin and Mark Ballas leave? Let us know in the comments below!