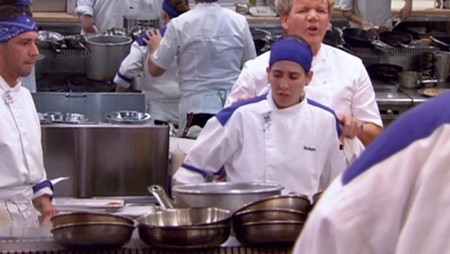 Our favorite chef Gordon Ramsay is back on FOX tonight with a new episode of his popular reality show Hell’s Kitchen. On tonight’s show we are down to 7 chefs: Clemenza, Barbie, Christina, Robyn, Brian, Dana and Justin  and with chef Gordon Ramsay at the helm there is always more insanity and drama than one sees on most reality TV.

Stay tuned as we live blog the episode with all the up-to-the-minute details and action.  Did you see last night’s episode when Kimmie was sent home? If you missed it, you can read our full and detailed recap here.

Last night, the red kitchen and the blue kitchen both failed miserably and got themselves all thrown out of the kitchen, although the red team did win the challenge.

Chef Ramsay told both teams to nominate one person to go home; red team choose Kimmie for burnt cat fish and the blue team choose Robyn for raw chicken. In the end, Chef Ramsay sent Kimmie home telling her that she was not ready to be a head chef.

On Tonight’s episode, chef Ramsay puts the chef’s communication skills to the ultimate test but first, the drama has reached the boiling point and everyone has to put their feelings on hold to shine at a very important dinner service.

We will be live blogging tonight’s episode to find out who gets a black jacket, so don’t forget to come back to this spot at 8:00 PM EST to spend the evening with us.  While you wait for the recap, hit the comments and let us know what you think about Hell’s Kitchen 2012, so far?

RECAP: Clemenza thinks Robyn needs to get her head our of her *ss or she is going to be going home next. With a new day in Hells Kitchen, both teams hope to redeem themselves.

The new “communication relay” challenge gives contestants five minutes each to cook three dishes, they take turns and have to continue where the last person left off.  The dishes are risotto, lamb and cod.

On the blue team, Clemenza seems more concerned about his apron than continuing where the last chef ended. Only 30 minutes remain, Barbie and Brian need to make sense of the chaos in the kitchen. Round 4 brings Dana and Robyn who already sets bad pace when she burns the cod. Justin and Christina do their best, then hand the kitchen over to Clemenza and Barbie for the last round. The cooking is complete, Chef Ramsay is going to decide which team did the best. Both teams fail with the risotto, the lamb as well, there is only the cod left.

Chef Ramsay is disappointed, for the first time ever in Hells Kitchen he cannot declare a winner, the chefs are making history because they suck. Both teams have to clean and prep the kitchens, as well as detail the SUV’s. After a long punishing day, chef Ramsay is looking forward to both teams redeeming themselves at dinner service.

To inspire the chefs, chef Ramsay tells them that they are cooking for a black jacket; this is going to be the most important dinner service of their lives so far.

Clemenza and Justin get the blue kitchen off to a good start. Christina aces the risotto, but when she tries to mix some leftover with a new batch, chef Ramsay catches her and calls her out.

Clemenza has to prepare five risottos and they all turn out in different colors; he has to start over again. Meanwhile, Barbie is determined to help Christina, but she turns it down and burns the risotto.

Clemenza finally delivers on his risotto, time for Brian to serve up his beef Wellingtons that turn out to be a disaster.

Chef Ramsay catches Robyn holding garnish in the oven and she claims her team told her to do it, but they all deny it. Justin and Robyn get into a screaming match over it and chef Ramsay can only put his head between his hands in disgust.

It’s an hour into dinner service and Robyn’s holding the garnish is causing a huge set back, Clemenza ties to tell them to get over it and focus on the dinner service.

Justin screws up and reheats uncooked fish, Robyn tries to suppress a laugh and chef Ramsay is not impressed.

The diners are getting restless on the blue side, while the diners on the red side are having an enjoyable experience.

The red team celebrates an excellent dinner service, while in the blue team it’s anything but a party. Diners are starting to walk out, the blue team totally sucks and chef Ramsay sends Barbie over to help him with the beef Wellington. Brian is losing it, he says he feels like a castrated dog, while Barbie rescues the blue kitchen with her Wellingtons.

The dinner service is over, chef Ramsay congratulates the red team and gives Dana, Robyn and Christina a black jacket; they are now a part of a very elite group. The blue team looks on and are furious, chef Ramsay tells them that their service was embarrassing; they need to decide amongst themselves which two don’t deserve a black jacket.

Back in the dorm, Robyn calls Justin a liar. Brian tells off Robyn and tells her she doesn’t deserve a black jacket. The first nominee is Robyn based on her being the weakest link. The second nominee is Celmenza and Brian; they couldn’t even come up with two people. Chef Ramsay calls all four of them forward, one simple task and they couldn’t even agree on it.

All the chefs tell chef that they are capable and deserving of a black jacket, it was like a tape recording. Clemenza and Justin have to take off their jackets, they get a black jacket but they are not based on tonight’s service but rather what they have done so far.

Brian and Robyn have to take off their jackets, there is only one black jacket left and Robyn gets it.

Brian is eliminated and sent home. Chef Ramsay issues a warning to Robyn, don’t make him regret this decision.