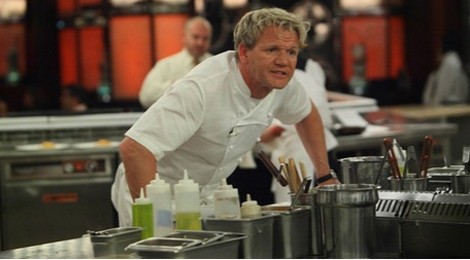 On last week’s show the remaining chefs celebrate making it to the final four, they were surprised by an unexpected visit to the dorm by some of their loved ones.    The remaining chefs thought that one chef would be going home last week, and they went to deliberate who to eliminate.  Chef Ramsay informed the group that two people were going home last week, and the next service in Hell’s Kitchen would be the last of the season. He eliminated Barbie and then show ended without telling us who the second eliminated chef was.

Tonight’s show will pick up from last week’s episode, Chef Ramsay determines who the two HELL’S KITCHEN finalists will be, bringing us one step closer to finding out who will win a head chef position working under Executive Chef Kevin Hee at Gordon Ramsay Steak at the Paris Hotel in Las Vegas!

In Part One of the two-part season finale, the two remaining chefs must build their final dinner service menu and Chef Ramsay brings in a team of world renowned chefs to judge their creations. Tune in to see who receives rave reviews and who needs to make up some ground going into the final dinner service.

We will be live blogging tonight’s episode to find out who gets a black jacket, so don’t forget to come back to this spot at 8:00 PM EST to spend the evening with us.  While you wait for the recap, hit the comments and let us know what you think about Hell’s Kitchen 2012, so far?  Are you happy with the two chefs who made it to the finale?

Tonight’s recap: On last week the first chef to go was Barbie.  Chef Ramsay tells the chefs there is only a fraction separating the chefs and that makes it very difficult.  The first chef going through is Christina, she is very excited and the Chef congratulates her.

Chef tells Justin and Dana they are both great but the second person going through to the final is Justin.

Chef tells Dana she has an extraordinary palette but she is not ready to be the Chef at his restaurant.

Chef Ramsay congratulates the two finalists, he tells them both they have to start thinking of their menu with four stunning appetizers, for stunning entrees and four stunning desserts.  The final chefs drink champagne and toast themselves and then get straight to work on their menus.

After a late night working on their menus both Chefs are up early, they have a lot of work ahead of them and they are eager to get into the kitchen.  But Chef Ramsay has other plans he calls them into his office.

The Chef tells them today it is vital to go through all the details with their sou-chefs but they are not there.  Apparently the sou-chefs are waiting for them poolside in Las Vegas.  Chef has arranged a day of pampering in Las Vegas and their sou-chefs are there.  They will be pampered but they have to work too.  They are getting flown in a private jet, VIP treatment.  Gordon tells them to enjoy the moment!

Gordon has one more present for them, he hands them each a gift and it is a new white jacket and both Chefs are thrilled.  Gordon asks them who is going to win and they both claim they will.

Scott comes to Justin’s cabana where he is getting pampered to work.  Christina get Chef Andy coming over to give her advice.  The Chefs give them advice where to be careful and where to take risks.

With their menus in order Chef Ramsay has another treat for them.  He pulls a curtain back and Justin’s mother and father is there and Christine’s Mother and girlfriend is there.  The Chef tells them all to relax and enjoy.

Chef has gotten the finalists and their family the most amazing seats to see Penn and Teller.  Justin is expecting a twist to be at the show and he is right.  Chef Ramsay is on the stage and he tells the crowd that it is time for his finalists final challenge.

The Chef asks the Chefs to come up on the stage.  He asks them if they honestly thought they were coming for fun?  He has put together an esteem group of judges and they will be judging five of their dishes.  They create their unique flavor on five dishes that could appear at Gordon’s restaurant.  The chef’s work on their dishes.

Christina and Justin come back on stage it is time for their Steakhouse menus to go head to head.  The first round is salad and Francoise Payard will judge their salads.  The chef prefers Justin’s salad – 1 pt to Justin.

The rib-eye round, Chef Stuart Gillies will judge this course.  The chef prefers Christina’s rib-eye – 1 pt to Cristina.

The filet round, Chef Wolfgang Puck will judge this course. The chef prefers Christina’s filet. – 1 pt to Christina.

The winner of the challenge is Christina!

The eliminated chefs are there.  The chef tells them there is a lot riding on this.

Because Christina won the challenge she gets first pick.

The chef’s go over their menus with their team.  Poor Justin Clemenza starts to give Justin a hard time.  He is not paying attention and tells Justin he has nothing to prove to anyone.  Justin tells hi if he does not feel he wants to be here, he should leave.  Clemenza gets up and walks out.

The finale continues next week with the conclusion.  Next week is the final dinner service that Gordon says everyone will be talking about.  Either Justin and Christina will win the show next week!