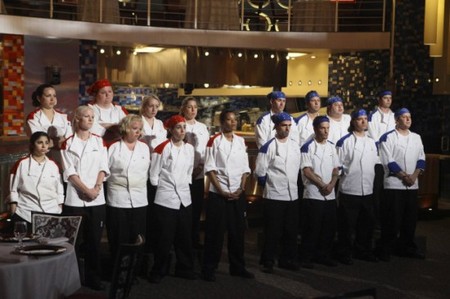 An all new season of Hell’s Kitchen starts tonight on FOX and I am excited.  My favorite chef Gordon Ramsay returns for more insanity and drama.  Stay tuned as we live blog the premiere with all the up-to-the-minute details.

On tonight’s episode part one of the two-night Season 10 premiere of HELL’s KITCHEN, 18 aspiring restaurateurs once again will brave Chef Gordon Ramsay and his fiery personality.

The contestants compete in an intense culinary academy to prove they possess the right combination of ingredients to win the life-changing grand prize: a head chef position working under Executive Chef Kevin Hee at Gordon Ramsay Steak at Paris Las Vegas. In the first team challenge of the season, Chef Ramsay asks the contestants to prepare their signature dishes and splits the chefs into two teams: men vs. women.

The winning team gets treated to a delicious dinner prepared by Season Three winner Dave Levey and Season Six winner Rock Harper, while the losing team is left behind to scrub down the kitchen in preparation for their first dinner service.

During opening night service of Hell’s Kitchen, the teams begin to fracture and mistakes are made before the first course is served. Find out which contestant is eliminated in the all-new “18 Chefs Compete.”