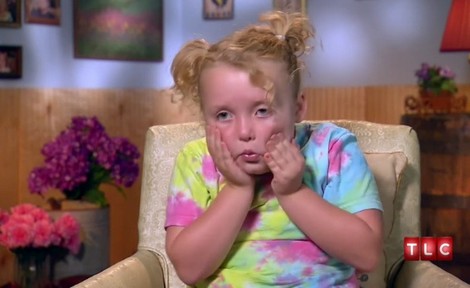 Tonight an all new episode of Here Comes Honey Boo Boo airs on TLC with its debut season finale. On tonight’s episode called “It is What it Is” Alan’s preparations for a big pageant are interrupted by Anna going into labor. If you missed last week’s episode called “Ah-choo!” we have a full and detailed recap here!

On last week’s show mom June Shannon took Honey Boo Boo and the other girls to play bingo with the hopes of winning money. However, the Shannons are clearly up to their usual antics during the game. June said that bingo should be considered a sport, as she enjoyed playing it despite her vision problems. She claimed to have liked the game since she was just 10 years old.   June commented, “Bingo is a sport. It helps me calm down and relax.”

On tonight’s show Alana gears up for her big pageant, but plans change last-minute when Chickadee goes into labor. Baby Kaitlyn arrives and it’s soon obvious that she’s a very special baby.  Mama Boo Boo June has a sneezing fit tonight and in the preview it goes on and one and on for the whole preview with Honey Boo Boo saying oh my and sneezing too LOL..

Don’t be upset that is the finale of Honey Boo Boo tonight.  Good news Boo Boo’s TLC has ordered Halloween, Thanksgiving and Christmas specials of Here Comes Honey Boo Boo.  You will be able to get to see your favorite little redneck again ;-)

Tonight’s episode looks like it is going to be another crazy Thompson family episode and you won’t want to miss it, so be sure to tune in for our live coverage of TLC’s “Here Comes Honey Boo Boo” at 10:00 PM EST! While you wait for our recap hit the comments and let us know what you thought of the last episode of Here Comes Honey Boo Boo?

Tonight’s episode: The family are doing a photo shoot by the water and Alana “Honey Boo Boo” is not that happy in the photos because it is really warm outside. The photographer wants the girls all to walk together and hold hands, but it’s a disaster. Time for the whole family to sit together for a photo, all the women are dressed up and Mike “Sugar Bear” is dressed in a ratty t-shirt and wrinkled pants. June “Coupon Queen” is so hot that she says she is bathing in her own sweat. In the end, there are quite a few photos that look really good and the photographer is exhausted.

Back at home, Alana is practicing for her pageant, Beach Beauties in Brunswick. Alana tries on her new blue swimsuit and gets a little sassy. June is really happy the way it looks, Alana loves it and thinks she looks like a blueberry muffin.

17-year old, Anna “Chickadee” is having contractions and is in a lot of pain. June doesn’t think Anna is ready for Kaitlyn because of how her life is going to change. Mike got to cut the umbilical cord, she weighed  6 pounds, 2 ounces. Jessica “Chubbs” is at the hospital to see the baby.

Katlyn has two right thumbs on the right hand and Jessica is the first one to give her a high six, Mike says it looks like a Swiss army knife. June has the best attitude, she calls Kaitlyn special and moves on.

Alana is mad, she is too young to be in the hospital room to see the baby. Jessica figures that she will probably have to sleep on the couch for the next two years with the addition of a new baby in the house. Alana and Jessica are fooling around when the cat starts to freak out.

Alana can’t do the pageant because of Kaitlyn’s birth, but she’s ok with it. Alanna is really happy that the baby is coming home, she can’t wait to find out what a new baby smells like. After 24 hours after Kaitlyn was born, they bring her home and Alanna gets to hold her and declare her love for her.

Alanna is full of questions about the baby, Mike is looking on and is very happy to see his daughter with a baby.

The next day, Alana is putting hairspray on her dolls’ hair when June walks in and tells her that they have a pageant to go to in two days, Alana couldn’t be happier. Lee “Uncle Poodle”, Mike’s youngest brother, is going to work with Alana and get her ready for the pageant, give her some sass and some glitz.

Anna is really doing well at being a mother and June is really proud of her. June sneezes a lot and it turns out that Kaitlyn does as well.

It’s a couple of days before the pageant and Lee has arrived to help Alana prepare for the pageant because as June says it, “he’s got a little fruit in his tank”. Lee calls the family “dysfunctional rednecks” and doesn’t know how his brother handles it sometimes.

Lee is trying to teach Alana how to do a cartwheel but it isn’t going too well. They are outside and decide to have a grass fight.

Time for the pageant, the whole family goes with Alana and June is nervous. Alana’s dress is a little tight and the skirt won’t close. Her dress is fixed, June tells her to smile and have fun.

When Alan is in pageant mode, she is a totally different child. She did very well, she didn’t miss a step. It’s time for the swimwear, Alana needs to get changed. Lee loves the pageant, if he could be up on stage he would be there in an evening dress. Time for Alanna to go on stage in her swimsuit, she has lots of energy and gets the crowd going. The judges seem to like Alana’s performance and Mike is very confident that she did well. It’s time for crowning, the contestants all have to get back up on stage.

Alana didn’t win for her age group, but she did win People’s Choice. There is a surprise for Alana, Lee brought Glitzy the pig, to the pageant. Alana wants to take Glitzy back home, but she can’t, he needs to stay at the breeders.

Alana is so happy she went to the pageant and declares herself and everyone else, pretty. Summer is almost over and overall the best part for everyone was Kaitlyn being born.