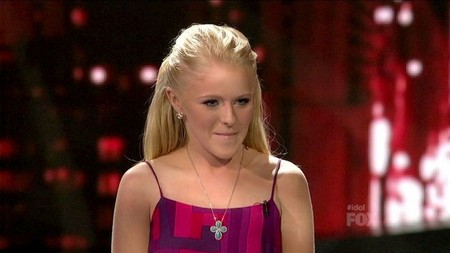 ROUND 1 60’s  – Hollie Cavanagh performed  “River Deep, Mountain High” tonight on American Idol the Top 5.  On last week’s show Elise Testone was sent home.  If you missed the show you can read our full and detailed recap here.  If you missed any of the performances from last week you can see them here.

Hollie says she chose “River Deep, Mountain High” because people want her to come out of her shell more.  I was surprised the song was actually pretty good!

Judges Comments:  Randy gives Hollie a standing ovation. Steven Tyler loved seeing Hollie sing the blues. The first time I really heard you step out. He thanks the Lord. Jennifer Lopez thought it was a different type of Hollie and she could really feel the energy. Randy loved it too. “You’ve gotta do it like there’s nobody watching,” Randy says.   He tells her to be less self- conscious.