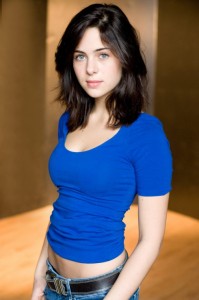 Meet Holly Deveaux, the actress who will play Casey Anthony in a Lifetime TV movie. The 19-year-old Toronto born actress hasn’t had a whole lot of acting experience but the role of the most controversial (and most hated) woman in America is sure to get Deveaux a whole lot of attention. Lifetime is taking on the movie and recently announced a cast of characters who will play the roles of the key players in the Casey Anthony murder case.

Rumor has it that Kristen Stewart, Alyssa Milano and Jennifer Love Hewitt were all up for the roles, but little known Holly snagged herself the role of the Florida mom who was found guilty of the murder of her daughter Caylee Marie Anthony.

But before you get yourself all excited and obsess with Miss Deveaux, it is important to note that she will not have a lot of scenes, so to speak. According to the Orlando Sentinel,

Deveaux will be limited in what she can portray because all of Casey’s dialogue in the film comes from public records, [Prosecuting Casey Anthony writer Alison Cross] said. The movie will rely heavily on news footage to give the picture a documentary look, and it won’t use re-enactments of Anthony’s life, Cross said. “It’s not our intention to make a movie that tries Casey Anthony for the third time,” Cross said. “She was tried in court and she was tried by public opinion.”

In other words, the actress who plays Casey Anthony will not have to have an extensive acting portfolio.

Other actors set for the flick include: former prosecutor Jeff Ashton will be played by Rob Lowe; Oscar Nunez will play Anthony’s defense attorney Jose Baez, and Elizabeth Mitchell will play Drane Burdick.

Filming is said to have already started filming in Winnepeg, Canada and will wrap in 20 days.

Check out some photos of Holly Deveaux along with an acting reel from the actress’ filmography below.