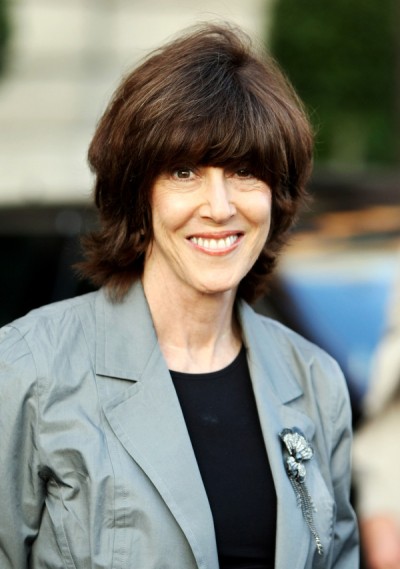 Oscar-nominated writer, Nora Ephron died last night after a six-year battle with acute myeloid leukemia. The tremendously successful mind behind such iconic Hollywood films as Sleepless in Seattle and When Harry Met Sally was only 71.

During her last hours, Ephron was surrounded by her family, husband of 20 years, Nicholas Pileggi, and two sons Max and Jacob Bernstein. In a statement released to People magazine, the family said, “We thank you all for your thoughts.”

But it is her Hollywood family that is speaking out this morning. Best known for her “chick flicks”, Ephron worked with some of the most talented women in the business from Amy Adams to Meryl Streep, Cher to Meg Ryan. Actresses flocked to Ephron who was one of the first writers to carve out well-rounded, flawed yet real, female characters. Of her talent, Ephron said, “I try to write parts for women that are as complicated and interesting as women actually are.”

And the outpouring today is one of sadness and heartsick appreciation. Here are a few of the condolences given by some of her friends:

Meryl Streep: “Nora just looked at every situation and cocked her head and thought, ‘Hmmmm, how can I make this more fun?’ You could call on her for anything: doctors, restaurants, recipes, speeches, or just a few jokes, and we all did it, constantly. She was an expert in all the departments of living well.”

Steve Martin: “She was the one you wanted to read, to listen to, to be in the company of. Nora Ephron. Incomparable wit; delightful friend. Sadness reigns.”

Sarah Silverman: “I just heard about Nora Ephron. I’m so sad. A great & prolific writer, a warm & kind soul. Gone just like that.”

Kelly Ripa: “RIP Nora Ephron. You will be missed.”

Rosie O’Donnell: “I am devastated. Nora was a close friend and will be missed terribly.”

Jimmy Kimmel: “I was lucky enough to dine with Nora Ephron. She made me laugh so hard I laughed again just thinking about it.”

Billy Crystal: “I am very sad to learn of Nora’s passing. She was a brilliant writer and humorist. Being her Harry to Meg’s Sally will always have a special place in my heart. I was very lucky to get to say her words.”

Nicole Kidman: “She was so smart, warm and funny. I am so grateful that she was my friend and we had the opportunity to work together.

Tom Hanks and wife Rita Wilson: “Nora Ephron was a journalist/artist who knew what was important to know; how things really worked, what was worthwhile, who was fascinating and why. At a dinner table and on a film set she lifted us all with wisdom and wit mixed with love for us and love for life. Rita and I are so very sad to lose our friend who brought so much joy to all who were lucky enough to know her.”

Let’s keep up the dialogue today. What was your favorite Ephron film? How do you think her female characters helped change the landscape for how women are portrayed on television today?