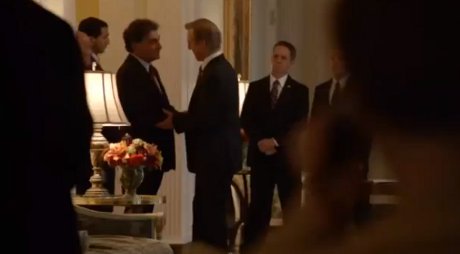 Sunday’s Homeland was edge-of-the-seat action. Here are some things I was happy about – I was thrilled that the team got the bomb before it got to the homecoming ceremony and killed the soldiers. I was happy for Jessica and Mike that they got to squeeze in a hook up – they’ve both put up with Brody’s crap for too long. I was also happy that Estes called off killing Brody. Not that I like Brody, but he’s got a great story line.

I’m also enjoying Dana’s full blown teen angst and anger at her Dad. And Quinn’s secret family is intriguing as well. At first I thought he was going rogue, but it looks like instead he’s working for two masters – both government and legit. Unless there’s something else there . . . . He’s living in a bolt hole and I never saw him as this interesting before.

But when the team took down the terror group, they didn’t snag Nazir which means Brody’s blown as an asset – or is he? After all, Nazir’s bound to come looking for him. So what does this Sunday’s episode hold? If you’re not into the whole spoiler and preview thing, then divert your attention immediately!

Saul meets up with Dar Adal – the agent who’s running Quinn’s bonus operation – and wonders why Estes didn’t tell him about it. Dar Adal tells him that the boss may not trust him – that Quinn may be there to keep an eye on Saul. He asks Dar why Estes wouldn’t trust him – Dar says Saul’s afraid to get his hands dirty.

Saul insists he likes to think things through first before dropping a bomb on a situation. Dar tells Saul he’s too sensitive to work in intelligence and that he thought Saul would have been long gone. Saul agrees. Is Carrie dragging down Saul’s career with her flake outs? Or is there more in Saul’s back story than we can see now?

Carrie tells Brody he can still keep his deal with the Attorney General – with a few caveats. He’s got to resign from Congress and they don’t want him on the vice-presidential ticket either. He needs an explanation to give the press for not accepting the nomination and he tells Carrie that he’ll say he decided to put his family before politics. She asks him how his family is – but he doesn’t know.

Good thing they’re in hands more capable than his: Mike’s… She reassures him that they can all go home soon and tells him that will help – he doesn’t seem so certain and I don’t think so either.

Looks like that’s the last Brody will be hearing from Carrie for now. Carrie’s car is found crashed, but no Carrie. Is she off on a mental bender or has Nazir picked her up to try and blackmail Brody into pressing on with the mission? Nazir has to know about her – he’s got great intel – so I wouldn’t be surprised if he had picked her up. I also wouldn’t be surprised if she’s flaked out because Brody’s headed back to her family.

With Carrie, the good thing is, these two are not mutually exclusive. She could be kidnapped by terrorists and crumbling about her weird relationship with Brody simultaneously. Fingers crossed, I hope that’s what we see. She’s been too stable for too long, she’s due for a little mental break.