Honey Boo Boo Explodes as Fame Becomes Too Much To Handle! 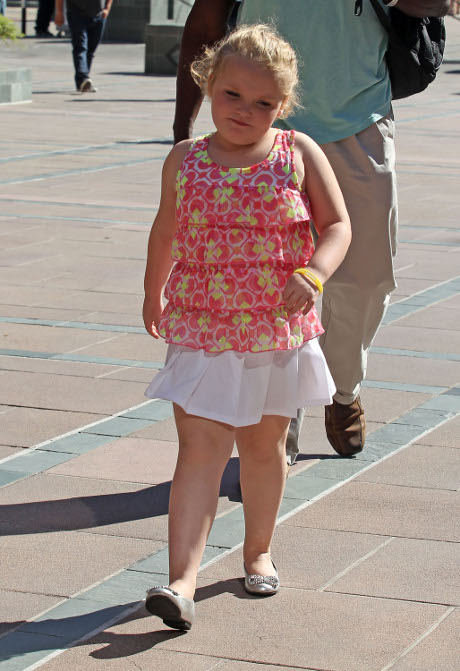 Honey Boo Boo is experiencing major psychological meltdowns, and a child welfare expert is linking her sudden, explosive behavior to her inability to cope with sudden fame, which her family continues to ride all the way to the bank. During a tour of recent media gigs to promote her TLC docu-series, Here Comes Honey Boo Boo, she’s been throwing fits and acting out in ways that some experts say might lead to future, tumultuous years fueled with angsty rebellion. She even tried to smackdown Dr. Drew when she appeared on his television show!

“Honey Boo Boo is having a meltdown, and it’s not surprising,” says clinical psychologist Dr. Judy Kuri­ansky in a statement for the National Enquirer. “Her family is exploiting that child for TV fame, which could have devastating results for her development.”

When she appeared on Dr. Drew, she failed to answer several questions, pretended to fall asleep, and even completed her little act with fake snores! Honey’s Mama Shannon couldn’t keep her in line or correct her behavior, which has been a common occurrence. In fact, when the pair did a recent television with a LA television station, Honey wouldn’t stop bouncing in her chair or stop singing loudly in an obnoxious manner. Apparently, she cannot be controlled and, if this behavior continues, people fear it will get even more out of hand as she grows older.

When Dr. Drew asked Honey if she liked being on TV, she said, “No! Because fans come up to me and I hate it! Yes, I do!” I don’t think Dr. Drew could’ve received a clearer answer from the lil’ beauty queen. If Honey desperately despises the limelight, wouldn’t you think her parents would take her opinions into consideration?

“I have no doubt that she DOES hate being on TV and being inundated by fans […] The way she is going now, she could end up being vulnerable to ad­dictive behavior with sex, drugs or alcohol. She is behaving in a very un-childlike manner, and her peers will not understand her and may make fun of her as she gets older. She could be vulnerable to bul­lying or to all kinds of anti-social, self-sabotaging behaviors. She needs time off to just be a lit­tle girl. It’s a very sad situation.”

It’s a shame that some parents would cash in on their child’s fame like this. Unfortunately, this is the reality of the entertainment industry. Honey Boo Boo Child just wants to be a kid and do normal things. What do you think of Honey Boo Boo’s parents’ exploitation of their daughter? Sound off in the comments below.