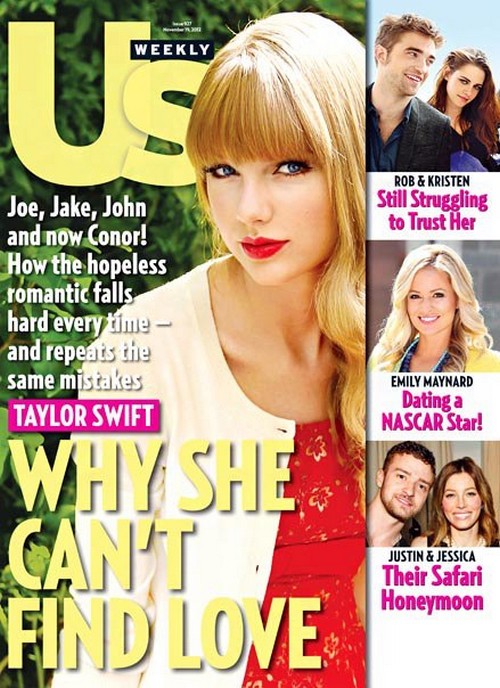 While Taylor Swift’s music career skyrockets, it seems her love life always ends up in the same place- the toilet. Her most recent romance with Conor Kennedy ended recently for reasons that change depending on who you ask. Maybe she decided to put her career first. Maybe she realized she had a snowball’s chance in hell of becoming a Kennedy wife. Maybe Conor did cheat as has been rumored. Who knows what really went on but the one true story is that it’s over. These failed romance’s give Taylor more writing material but that doesn’t keep her warm at night. The latest issue of Us Weekly takes an in-depth look at the 22-year old star and her rough path to love.

Also in the latest issue is a cover article about the still rocky reconciliation of Rob Pattinson and Kristen Stewart.  Months after she hooked up with her married boss, Rob is still struggling to trust Kristen. Maybe it’s because the full truth has yet to come out and somewhere in his gut he knows it. She insists that there was no sex but I’m sure Rob is thinking it’s just not true.

One really happy couple is the newly married Justin Timberlake and Jessica Biel. They got hitched a few weeks back and Us has all the details on their jungle safari honeymoon to Tanzania.

It also looks like Emily Maynard is wasting absolutely no time in looking for a new guy. She and Bachelor winner, Jef Holm just recently pulled the plug on their messy relationship (if we can call it that) and she is rumored to already be moving on.  Emily was caught on the dance floor recently getting cozy with NASCAR truck driver Jason White. Us has all the secret details on Emily’s latest hook up so grab yourself a copy from news stands soon!