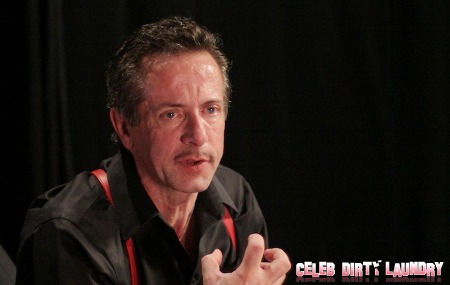 The famous Clive Barker, the creator of the Candyman and Hellraiser franchises, allegedly gave his boyfriend HIV, kicked him to the curb, and now Barker’s ex-boyfriend is suing!

Emillian David Armstrong reportedly met Barker in 1996 and moved in with Barker with Armstrong’s daughter from a previous heterosexual marriage. All seemed well in this relationship, but it quickly took a turn for the Ricki-Lake-title-worst! Emillian claims that he was diagnosed as HIV positive in 1996. Barker allegedly tested HIV positive and urged Armstrong to get tested. He believes Barker gave him HIV.

Armstrong revealed some pretty disturbing details recently and claims that Barker engaged in a homosexual relationship with his own AIDS infected cousin before meeting Armstrong and that Barker enjoyed sadomasochistic rituals with syringes. Armstrong waited 16 years to file this lawsuit. Why the sudden change of heart? Why the sudden importance to sue your ex?

Armstrong claims the couple tried to work it out and battle the virus together, but in 2003, things became a bit too much. According to Armstrong, Barker became involved with prescription drugs and mixed them with alcohol and meth for recreational purposes. Armstrong stood by Barker, but things took a terrible turn for the worst when Barker became involved with drug-fuelled parties he held at his house, with young boys ranging in age from 19 – 21.  Armstrong also claims that Barker kicked him and his daughter to the curb in 2009 and left them destitute. Armstrong was supposedly a business partner in some of Barker’s business ventures and he demands a share of the profit.

We all were scared beyond recognition by the strange and macabre beauty of Barker’s work, but no-one prepared us for this perturbing revelation! Not even the best horror writers in the world are able to dream up a story as disturbing as this one.