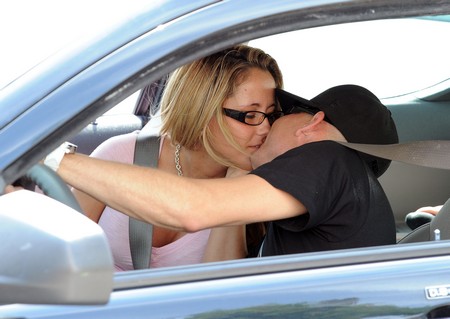 Jenelle Evans got a new car not so long ago, a new Jetta, she was so proud of she tweeted pics of it. She is really glad she has full coverage insurance right now. While driving on a highway she hit a deer at 4 am while driving home from Myrtle Beach.

Jenelle tweeted, “Hit a deer at 4am in the morning on the highway coming back from myrtle, now I feel like I’m f***ed.. I have full coverage thank god“

She was in Myrtle Beach with her fiance Gary Head to see her fellow Teen Mom 2 cast mates. The teen moms had been tweeting about how excited they were to see each other again and how much fun they were having. Gary Head was tweeting he couldn’t wait to go clubbing and seemed they were all going to party hard.

Kail Lowry and Her boyfriend Javi Marroquin were joined by Leah Messer and her husband Jeremy Calvert. There was a stop off to see Leah’s mom. The group rode jet skies and overall had a great time. Kail said she’s only been on 3 vacations but this one was the best. She also tweeted she missed her son Isaac who was with his dad during the vacation.

The two girls had one problem though, the went shopping at a Victoria’s Secret in South Carolina where the employees were saying a bunch of mean stuff so loudly the girls over heard them and dropped What they had and left. The two were very upset about the employees comments. I would have Been too when you go shopping at any store you expect to be treated with respect this clearly wasn’t the case.

Kail tweeted her excitement to get back to Isaac tomorrow and squeeze him tight and she was sure he probably grew while she was gone.  Kail and Javi are spending the night and getting some much needed rest before they head to the home of Leah Messier and Jeremy Calvert.

Keeping you up to date on all the Teen Mom 2 news – see you later for more!