How Katie Holmes Took Control Over Her Own Divorce 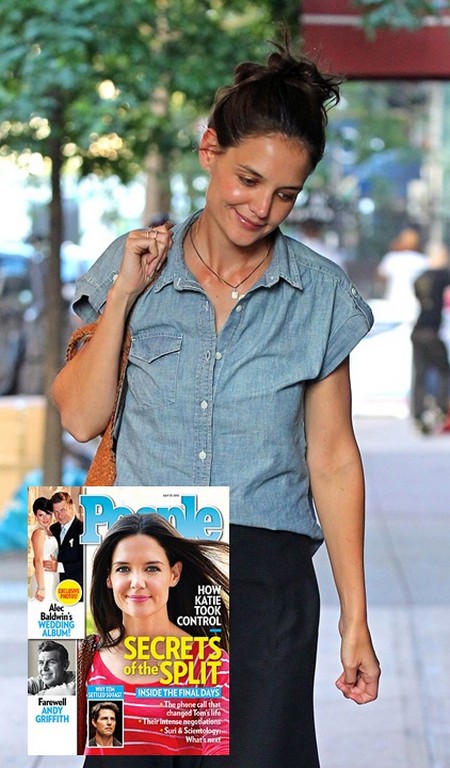 The current issue of People Magazine features the cover story ‘How Katie Took Control – Secrets Of The Split.’ The magazine claims to have all the secrets of how Katie Holmes and Tom Cruise‘s marriage crumbled faster than a fortune cookie.

They have all the details on the final phone call that changed Tom’s life forever.  Tom was stunned he thought he had a happy marriage and is still reeling from the phone call.   “He keeps asking, ‘What’s happening?’ “ Now if that is not enough they have insight into the intense negotiations that followed.

People magazine reports: “Once she decided to go, she was done,” says the source.  With help from her unflinching attorney father Martin, she orchestrated a secretive exit strategy that included moving into a new downtown Manhattan apartment, switching cell phones and keeping her megastar husband in the dark – until a bombshell phone call in which she broke the news to him.

“She knew she had to have everything locked down before she pulled the trigger,” says the source, “because there could be no wiggle room if she didn’t want this to turn into a long, drawn-out battle.

The divorce was something Katie planned carefully she did not want it to be drawn out.  Katie Holmes took total control over her divorce.  Rumor has it all plans were made on a throwaway phone to keep her plans secret and private.  Her plans worked and a scant 11 days after the divorce was announced lawyers for both side reached a settlement.  Rumor has it Katie got exactly what she wanted, primary custody of their 6-year-old daughter Suri.

To find out more details about the marriage breakdown, Scientology’s continued role in their life and a lot more pick up the current issue of People magazine on stands now!