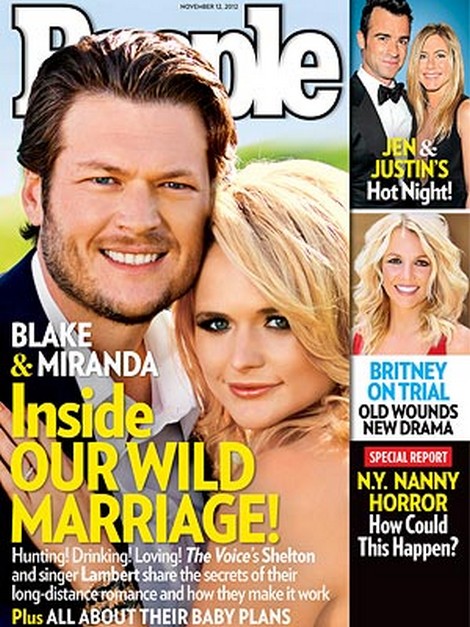 The current issue of PEOPLE MAGAZINE features the cover story “Blake & Miranda – Inside Our Wild Marriage!”   This week’s cover features Grammy Award winning country singer and host of The Voice Blake Shelton and his wife of 18-months Miranda Lambert. This is the second marriage for Blake who was previously married for three years and the first marriage for Miranda.  This week the magazine has the scoop on how the couple keeps their relationship fresh and exciting.

“We won’t go more than two weeks without seeing each other,” says Lambert, 28, in PEOPLE’s new issue.  But sometimes, not seeing each other works wonders too. If they spend too much time together, says Shelton, 36, “we’ll kill each other!”  Despite their busy schedules, which Lambert has said meant they’ve spent only about 150 days together since they exchanged vows under an arch of antlers in her native Texas in May 2011, the couple has recently been able to hunker down in their rented home in Hollywood (where Shelton tapes The Voice).

So what is the secret to their wedded bliss and how do they make a long-distance romance work?  Well Miranda said after she married Blake, “I’m married to my best friend! Looking forward to a lifetime of laughter.”  The two have a lot in common, they love to drink and hunt and they are the perfect match.  Blake and Miranda did not rush into marriage the two dated for more than four years before walking down the aisle.  The happy couple always make sure not to spend too much time apart and they are thinking of adding a baby to the mix.

To find out more about this happy couple’s secrets to a successful marriage, their future baby plans and a whole lot more, pick up the current issue of People Magazine on stands Friday!