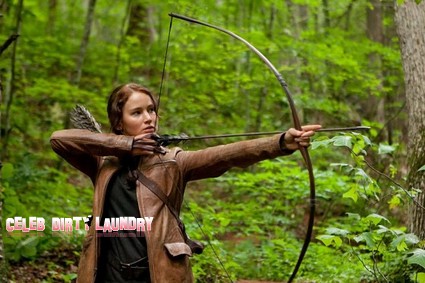 Jennifer Lawrence had such a bad injury when filming ‘The Hunger Games’ that she thought she had “burst” her spleen.  The 21-year-old beauty who plays the lead role of Katniss was running at a wall at maximum speed in order to gain momentum to propel herself up when her foot got stuck and she hit the surface with her stomach, leaving her trainer concerned she had done some serious damage.

She told The Hollywood Reporter: “I had to do 10 ‘wall runs,’ where you run at the wall as hard as you can to get traction.  I ran at it and my foot didn’t go up, so I caught the wall with my stomach. My trainer thought I had burst my spleen. I had to get a CAT scan and go into a tube where they put this fiery liquid in your body.”

Jennifer’s health was at risk but she was able to continue filming on schedule and wasn’t required to do much additional training afterwards as she was already “pretty bulked up” from starring as Mystique in ‘X-Men: First Class'”.

She added: “I was still pretty bulked up from ‘X-Men: First Class’. So a lot of the training was getting muscle back, heightening the muscles without building them. I loved the archery – well, I have a love-hate relationship with it.”

I guess that’s the risk Hollywood stars take when stuntwomen can’t be used.