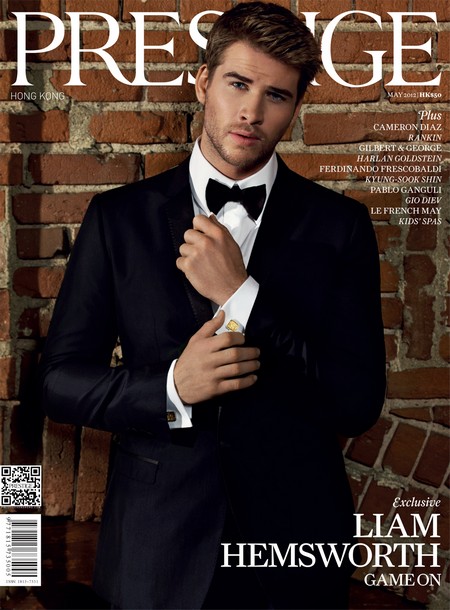 Australian-born Liam Hemsworth has had an amazing start to his career by being fortunate enough to appear in the first film of The Hunger Games trilogy.  This has cast the 23-year-old into orbit as a bright international star whose bright future is assured.

Prior to arriving in California when he was only 20, Liam had parts in the TV series Neighbours and Home and Away TV series. Liam’s famous relationship with singer-actress Miley Cyrus has not hurt his fame, to say the least.  Despite all this dazzling success Liam remains well-grounded and insists on keeping it real.

Liam did an exclusive interview and photo shoot for Prestige Hong Kong’ May 2012 issue and all indications are that he is perfectly okay with his meteoric rise in star status.

“I haven’t really changed that much,” says the surfer-turned-screen star, who will soon follow up The Hunger Games with a role in The Expendables 2 alongside Sylvester Stallone, Bruce Willis and Jason Statham.

“I still go surfing and hang out with friends.” What is different, however, is the opportunity Hemsworth now has to indulge his passion for cinema. “I love acting,” he tells Prestige Hong Kong.

“I love making movies and being a part of the whole process of making movies. I’m able to meet directors that I’m a fan of…and I got to work with Stallone and Statham…guys that I had grown up watching. That was pretty incredible and really humbling.”

The May issue of Prestige Hong Kong also features Cameron Diaz, rising women’s shoe designer Gio Metodiev, and the photographer Rankin displaying an amazing 10-page portfolio of his work.  Of course you can also read about all the high class action in Hong Kong within the covers.