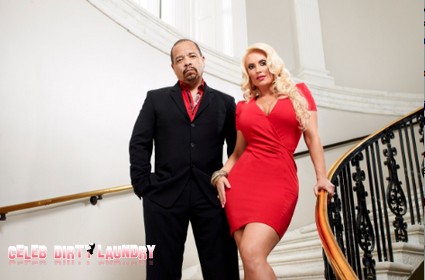 Tonight is the first night of a 2-night premiere event for the second season of Ice Loves Coco.  Stay tuned as we live blog the show tonight with all the up-to-the-minute details.  Ice Loves Coco follows rapper and actor Ice-T and his wife Coco Austin.  From the moment viewers saw this duo renew their wedding vows last season, Ice Loves Coco has been a hit.   Ice says the reason people love the show is: “”We’re not a regular reality couple that will do anything to be on television.  We were like, ‘Love it or leave it.’ We knew a real show without all that train wreck stuff would work.  With us, they had to shoot what we are, which is a happy couple. And people like seeing people happy.”

We will be live blogging the show with all the up-to-the-minute details at 10:30 PM EST so make sure to come back to this spot and watch the show with us.  While you wait for the recap you can watch a sneak peek video of the episode below!

RECAP: Ice is in ‘hair and makeup’ for Law & Order, they are part of his family having been on the show for thirteen years now. Danni’s dog, Franny, seems to be in love with Spartacus, Ice-T and Coco’s dog. Coco is dizzy and light headed, Kelly asks if she thinks she is pregnant. Later that night, Coco takes a pregnancy test and Ice starts to freak out.

It turns out that Coco is not pregnant, Ice-T wants her to go to the doctor and get checked out. Kristy, Coco’s sister arrives because her and her husband, Derek are big fans of Jimmy Fallon and Ice-T  is on the show this week. They bring along their baby son, Austin, Coco tells Kristy that she took a pregnancy test and it was negative. Kristy tells her that she got pregnant when she was on the pill and all tests are not always correct.

Coco is with her sister meeting Dr. Kosta, she tells her that she is not pregnant but her blood pressure is really high.

The doctor tells Coco that someone at 40 years old with high blood pressure like you could have a heart attack, she has to have an MRI. Ice is worried, but he is going to keep her calm. Ice-T doesn’t think he should do the Jimmy Fallon show, but she still wants him do it.

Everyone is in the green room at Fallon’s show. Coco tries look on the internet to find out what she has and Ice-T tells her that is like asking Dr. Dre for an opinion.

Coco is at the hospital, Ice-T couldn’t make it because he is working on Lay & Order, so she brings Soulgee, her sister and Austin along with her.

Dr. Katz tries to calm Coco when she starts to cry, she is afraid the test is going to hurt. She is really nervous, but she is in the tunnel and the test is done, now it’s a two day wait for the results.

Ice T. is at work, he is wondering if Belzer is upset that he didn’t mention him on Jimmy Fallon. He confronts him and finds out that Belzer was just joking around, he’s not upset at all.

It’s Kristy and Derek’s last night in town, Ice-T and Coco take them on a boat tour but Coc can’t stop thinking about the results of her test.

The next day Ice-T and Coco are at the doctors, ready to get the results. The test results doesn’t show why Coco has extremely high blood pressure and leads to stroke and heart attack, also, there is no getting pregnant with high blood pressure. Ice-T thinks the results are good because at least her organs are all ok, but Coco is upset that she was told that they cannot have children, for now anyway.

That’s all for tonight’s episode, come back tomorrow night for another all new episode.