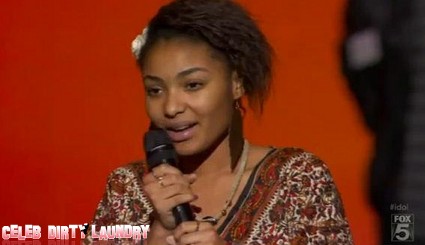 Tonight’s Hollywood Week kicked up the show a notch, but not in the way I was hoping for. I had really hoped for something better than the boring and lackluster singers we have seen, but instead, sadly the only excitement tonight was poor Symone Black passing out and falling off the stage. Black auditioned from San Diego and hails from Rancho Cucamonga, California; she proclaims her dad to be her mentor, coach and a real stage dad.

It was actually a little scary, Black finished her song, Otis Redding’s “Sitting On The Dock Of The Bay” and was chatting with the
judges when she swayed back and forth with her father looking on from above the audience. All of a sudden, the 16 year old crashed and fell to the bottom of the stage.

Black’s father rushed to his daughter’s aid as Steven Tyler could be heard saying, “she hit her head.” Nigel Lithgoe immediately called for a medic and the last thing viewers got to see, was Black being put into a head brace. Ryan Seacrest was visibly very upset and I can’t imagine the terror that her father must have been going through. Black’s condition and fate on the show will be revealed on Thursday’s episode.