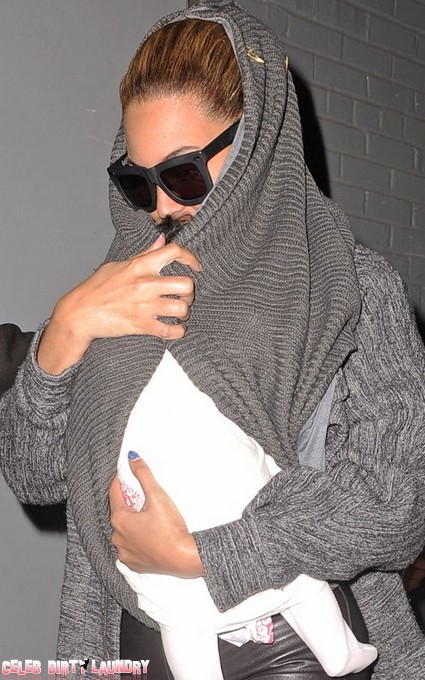 Beyonce‘s little bundle of joy is in the spotlight. Is the superstar carrying around her almost three month old daughter in public or a very lifelike baby doll? Some people reckon the Blue Ivy Carter we’re catching a glimpse of here and there could sometimes be less flesh and blood and more plastic.

According to MediaTakeout.com the infant’s size doesn’t quite add up. They compared photos of the tot just over a week apart and according to their calculations baby Blue has grown up to 2.5 inches in that time. That kind of growth rate is unheard of. Unless Bey and Jay Z have some extra special formula for their little one. They do have more money than they know what to do with!

When you think about it – carrying around a baby doll wouldn’t be beyond the realms of possibility. Beyonce and her husband are super private people. No one even got a glimpse of their first born for several weeks. There are some photos where you can clearly see Blue Ivy – but there are others (like the one above) that make you question what exactly the Crazy in Love singer is holding.

It’s bit like deja vu. Remember when Bey’s baby bump looked fake and everyone started saying she wasn’t really pregnant. We aren’t suggesting there’s no baby – just that its grown a HUGE amount during March. Maybe the new Mom is having the last laugh at the paparazzi stalking her every move.