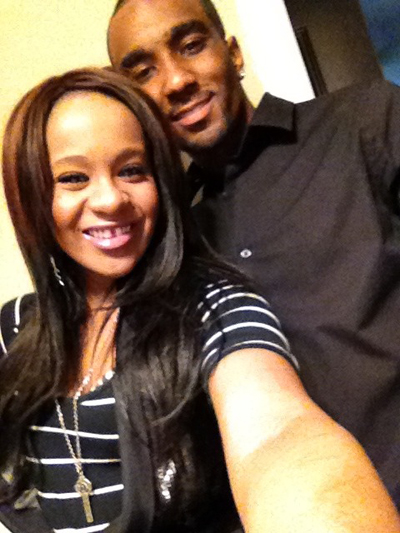 Since her mother Whitney Houston’s death, Bobbi Kristina Brown has been MIA on Twitter; however, the Twitter account of her unofficial adopted brother, Nicholas ‘Nick’ Gordon, tells a different story!

The 22-year-old recently Tweeted the above photo of himself and Bobbi Kristina, 19, and according to HollywoodLife.com, multiple eyewitnesses recently saw the two making out at a Target in Georgia, near where they currently live.

“Bobbi and Nick were in the music section and then all over the store,” two sources told the website. “Bobbi was kissing him on the mouth and holding hands. They were laughing and smiling and seemed SO happy.“

While they’re not blood relatives, Nick was taken in by Whitney when he was a child and raised as a sibling to Bobbi Kristina. And what gives their relationship a creepy edge is that the two even refer to each other as brother and sister, while sending flirty Tweets back and forth:

“I love sleeping with big brudder (: only person that helps my insomnia B!! Hah (: #teamfamilia!” Bobbi Kristina Tweeted over the holidays, later adding, “Mmm @ndgordon An I.. Mmm can you say early risers ?(:” Related: Whitney Houston’s Will Leaves Everything To Bobbi Kristina

Reportedly, Bobbi Kristina’s grandmother, Cissy Houston, does not approve of their relationship or the fact that the two are currently living together in the same house. However, considering that Bobbi and Nick’s relationship seems to have started long before Whitney’s death, Grandma may have a hard time convincing Nick to move out.

What do you think, readers: Is Bobbi Kristina’s relationship with her unofficial adopted brother Nick sweet or really weird?