Is Emily Maynard Choosing Fame Over The Needs Of Her Young Daughter? (Photo) 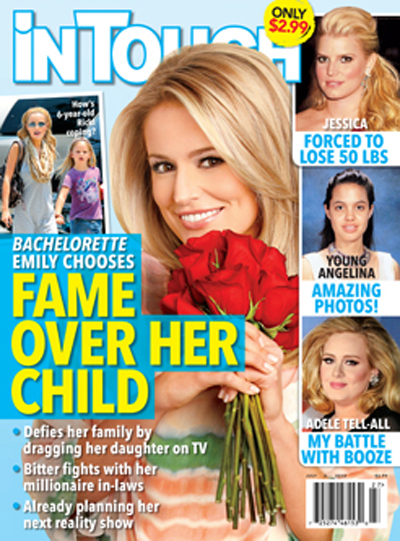 Bachelorette Emily Maynard may end up finding love on the ABC reality TV, but is she hurting her young daughter in the process?

The latest issue of InTouch Magazine reveals that Emily has seemingly chosen fame over family, and her strained relationship with the parents of her late fiancé and the father of her child, Ricky Hendrick, is largely due to Emily’s decision to subject her daughter, Ricki, to a “bizarre parade of cameras and unfamiliar men.”

“They were beside themselves when they found out she wanted to put little Ricki on TV,” said an insider to the magazine. “They think it’s outrageous that she’d be putting their innocent granddaughter in the middle of this media circus.“

“Mr. and Mrs. Hendrick are the sweetest people you’ve ever met, and they care about their granddaughter,” added the source.

However, it doesn’t look like a reconciliation will be in the works anytime soon. Reportedly, Emily is already planning her next reality show and is hoping to drag out her 15 minutes of fame for as long as possible.

To find out more about Emily’s bitter battle with her daughter’s grandparents– pick up the current issue of InTouch for all the details! Related: Bachelorette Emily Maynard’s Plastic Surgery And More Secrets Revealed